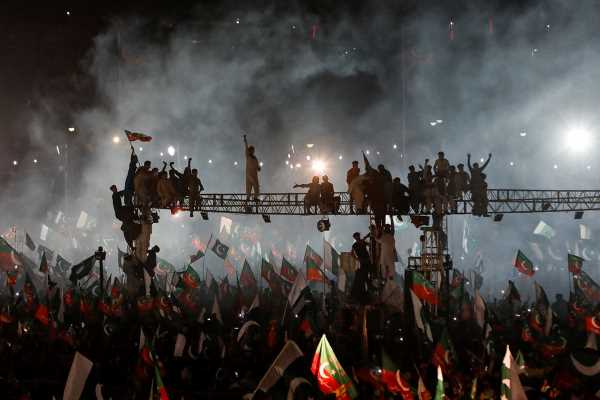 Imran again highlighted his allegations of a foreign conspiracy behind his ouster as Pakistan’s prime minister and said he knew that the ‘match was fixed’ when a no-confidence motion was moved against him in the national assembly.

Please click on the images for glimpses of Imran’s rally in Karachi. IMAGE: Karachi and Sindh are not Pakistan Tehreek-e-Insaf territory; traditionally, the city and the province where it is located are Pakistan Peoples Party and Muttahida Qaumi Movement strongholds, which makes the turnout at Imran’s rally interesting. IMAGE: If a PTI rally can draw such a large gathering in Karachi, the next general election in Pakistan, likely sometime this year, could be very interesting.
Imran coasted to power in the last election clutching onto the army’s coat-tails; the military no longer backs him. So the cricket legend will need all his charisma to make an impact at the ballot box.