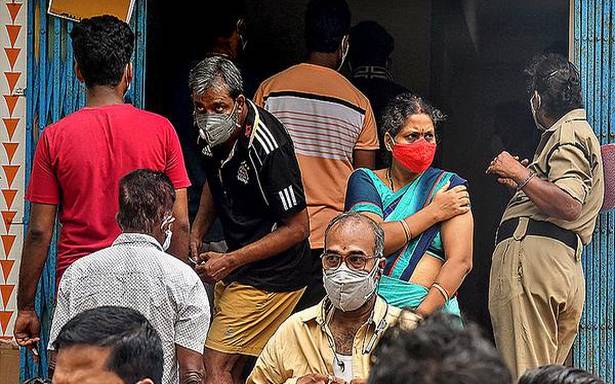 ‘Using mask, sanitiser and keeping away from crowd are must irrespective of vaccination status’

Amid the prediction that the third wave of coronavirus pandemic can set in any time after mid-August, experts have reiterated that the only way to beat the virus is by scaling up the mass vaccination programme.

“ The third wave looks imminent. There can be no end to such waves if the majority of the population is not vaccinated. The only possible safeguard is to ensure that more people are vaccinated,” said Dr. Paul Kelly, consultant infectious diseases and medical director at Bronx Care Centre for Travel Medicine, New York.

He was speaking about the Sars CoV-2 variants of the virus and vaccine efficacy at a webinar organised by the Andhra Medical College (AMC). “The virus is mutating quickly and this has become a concern for the medical and research fraternity. So, the vaccination should happen fast and in bulk,” he said.

The pandemic began in China with the D614 mother variant in the early 2020. It mutated to G614 while it was Alpha B1.1.7 in the U.K. and then it was Beta B.1.351. The Brazil Gamma P.1 and Epsilon California variants combined to form the B.1.617.2, which is known as the Delta variant which caused havoc in India during the second wave, he explained.

“The Delta variant is at least 100 to 110 times more powerful and infectious than the mother variant of D614,” said Dr. Kelly.

AMC principal P.V. Sudhakar said the virus was mutating faster than expected. “Multiple mutations make it difficult to know critical aspects of the virus such as rate of transmission, severity of illness and efficacy of vaccines. We need to stop the mutation and vaccination of the entire population is the key,” said Dr. Sudhakar.

Dr. Sridhar Chilimuri, physician in chief and chairman of Department of Medicine of Bronx Care Hospital Centre, New York, said two vaccine doses are safe as of now. But in the future, booster doses might have to be taken to keep the virus at bay. “The delay in vaccination increases the chances of the virus undergoing mutation which means possibilities of multiple waves,” he said.

Referring to the vaccination drive, Dr. Sudhakar said almost 95% of population in the 45 plus age category (12 to 13 lakh) in Visakhapatnam district have been vaccinated with two doses while 90% of the health care workers have been inoculated.

“Given a population of more than 40 lakh, it is still a long way to go. The focus should now be on 18 to 45 age category, which accounts for bulk of the population. The earlier it is done, the safer people are,” said Dr. Sudhakar.

The wave pattern, he said, depends on three factors – agent, host and environment. “With the relaxation of restrictions, the possibility of spread is more. So people must not let the guard down. Wearing mask, sanitising hands regularly and keeping away of crowd are must irrespective of vaccination status,” he said.