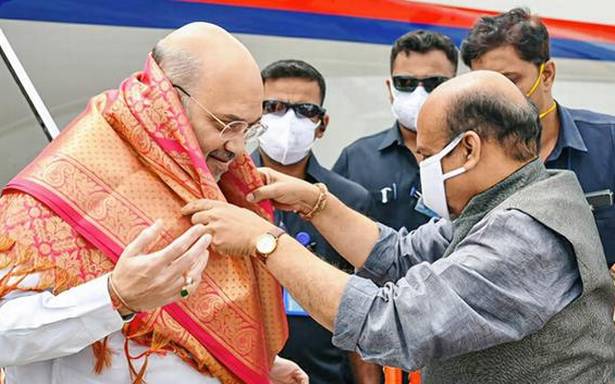 Bommai meets Yediyurappa, apparently to pacify him over Shah’s comment on leadership

Chief Minister Basavaraj Bommai met his predecessor B.S. Yediyurappa and discussed the “political situation” for nearly a hour on Sunday morning. Mr. Bommai had the arduous task of pacifying the veteran leader, who is said to have become upset over Union Home Minister Amit Shah’s recent statement that the BJP would go into the 2023 Assembly elections under the leadership of the Chief Minister, sources said.

Mr. Shah’s statement is believed to have caught many seniors in the party, including Mr. Yediyurappa, off guard. K.S. Eshwarappa and Jagadish Shettar have made public statements trying to downplay Mr. Shah’s announcement and stressed on “collective leadership”. The two leaders, who have not been on the same page aas Mr. Yediyurappa, seem to have been building bridges with the veteran leader recently, coalescing around him after they were sidelined. Mr. Shettar also met Mr. Yediyurappa in the city on Saturday.

During the Sunday morning meeting, Mr. Bommai reiterated his allegiance to Mr. Yediyurappa and his leadership, while also pledging all support to the veteran leader’s proposed Statewide tour after the Ganesha festival. The Chief Minister also discussed the demands by certain Ministers to change their portfolios and reshuffle nominations to boards and corporations, in light of his New Delhi trip on September 7. “It was a clever strategy by the Chief Minister to demonstrate to Mr. Yediyurappa that he was consulting him on all political matters,” a party strategist said.

Many seniors in the party thought that Mr. Bommai being anointed as Chief Minister was a necessary stop-gap arrangement to pacify both Mr. Yediyurappa and the Veerashaiva-Lingayat vote base, and that the leadership race in a post-Yediyurappa phase was still open. However, Mr. Shah’s statement has upset many calculations and shown the first signs of Mr. Bommai emerging from the shadows of his mentor and becoming a leader in his own right, making many other senior leaders anxious.

However, senior office-bearers of the party also downplayed the significance of Mr. Shah’s statement. “What else could he have said? Anything else would have undermined the Chief Minister. It was a message to the party to set aside differences and work, and also one to the Veerashaiva-Lingayats anxious about the talk of Mr. Bommai being a stop-gap arrangement,” a senior leader said.