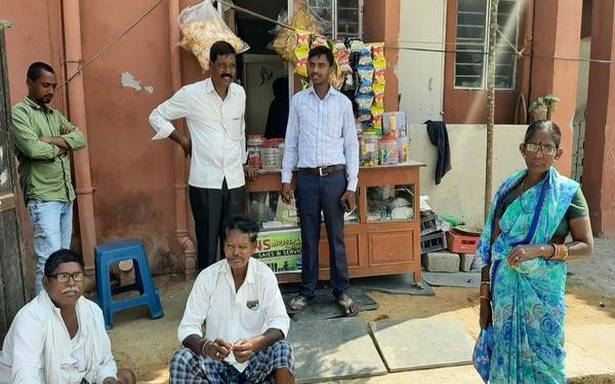 Compensation money may not last long to meet their needs, they fear

A group of people are gathered at a makeshift roadside grocery store, run by Timirishetti Lavanya, at this 2BHK colony at Sangapur on the outskirts of Gajwel. Ms. Lavanya, like all other members of the group, is an oustee from Erravalli village in Kondapaka mandal in the district and has been temporarily accommodated here before being handed over the promised houses at Rehabilitation and Resettlement Colony at Mutrajpally.

Two elderly persons — D. Rajaiah and Edla Balamallaiah — recently displaced from Erravalli are sitting on the footpath in front of the shop striking up conversation with fellow oustees.

Under any other circumstances the scene might have appeared normal. However, at Sangapur 2BHK colony the biggest issue is that not one of them has a source of livelihood and no one has any idea of what future holds for them. All they can do is indulge in chit-chat to while away the time.

Mr. Rajaiah has four brothers and together they had about 3.3 acres of land in Erravalli. Their land was taken over by the government for the construction of Mallannasagar and they received a compensation of nearly ₹ 20 lakh of which Rajaiah’s share was ₹ 4 lakh. That amount was spent on addressing family needs over the past few years and now he is left staring at empty pockets.

The case of Mr. Balamallaih is somewhat better. He sold three acres land in the village for the project and received ₹ 18 lakh as compensation. He spent about ₹ 15 lakh and bought a housing plot of 200 square yards near Kuknoorpally. The balance was spent on other family requirements.

“At Erravalli we used to work in our fields and or in the fields of neighbours. Now there is no work as our lands have been taken over by the government for the Mallannasagar project. We are living out of the compensation amount received from selling our lands. We do not know what to do and what is there in the store for us,” says Mr. Rajaiah.

“We were promised permanent accommodation at Mutrajpally within one month at the time of vacating our village. We came here about three months ago and the houses are yet to be handed over. It may take few more months to go into our new houses,” said another Erravalli oustee, unwilling to be identified.

Palle Raju, who was vice president of Erravalli, said that the primary allotment was over but completion of individual houses at Mutrajpally is likely to take few more weeks and added that they were making do with the temporary accommodation at Sangapur.