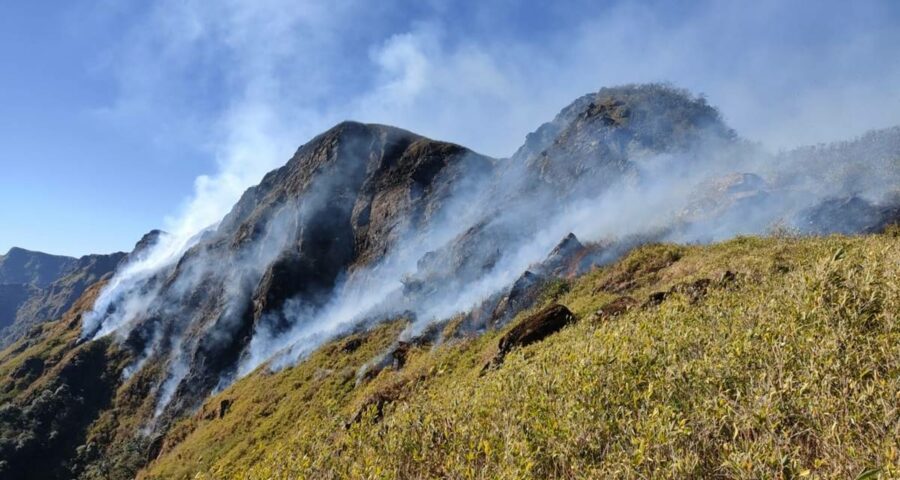 The fire has destroyed vegetation on Mount Iso, Manipur’s highest peak, and is spreading towards Yangkhullen area of Senapati district. The Dzuko valley wildfire at the Manipur-Nagaland border is leaving behind a trail of destruction as it continues to rage on for the seventh day. On Tuesday, an NDRF personnel engaged in firefighting operations was found dead in his tent. The exact cause of his death is yet to be ascertained.

Official sources said Assistant Sub-Inspector (ASI) N Binoy from Imphal West had been deployed at the base camp since January 1, and was actively engaged in extinguishing the wildfire till Monday. On Tuesday morning, he was found dead on his bed when a fellow firefighter went to wake him up. Manipur Chief Minister N Biren Singh has expressed his condolences at the death.

The fire has destroyed vegetation on Mount Iso, Manipur’s highest peak, and is spreading towards Yangkhullen area of Senapati district.

Kh. Kiran, Deputy Commissioner of Senapati, said water sprayed from helicopters is not hitting the desired targets owing to high-velocity winds and steep terrain. The district administration is now planning to request the Chief Minister for another aerial survey, to identify routes for firefighters to manually contain the fire, added Kiran.

“As most of the Dzuko hill range is steep, navigating through the mountain is a daunting task. With Mt. Iso completely burnt, even expert trekkers are finding things difficult. There are no bushes and shrubs to hold on to. There is an urgent need for another aerial survey to identify alternative routes with the help of locals,” he said.

To ascertain the scale of destruction, Kiran said, assessment is being carried out with the help of all departments concerned.

Meanwhile, on the Nagaland side, the Kohima District Disaster Management Authority (DDMA) has said that the wildfire has been brought under control.

Sources from DIPR Nagaland said a total of 24,000 litres of water were dropped as part of the fire fighting exercise on Monday. Indian Air Force helicopters were utilised for dropping the water.

The DIPR stated that the blaze is now concentrated in the area between Mt. Tempfu and Elephant gate (near the main Valley), while in the rest of the area, flames have completely subsided.