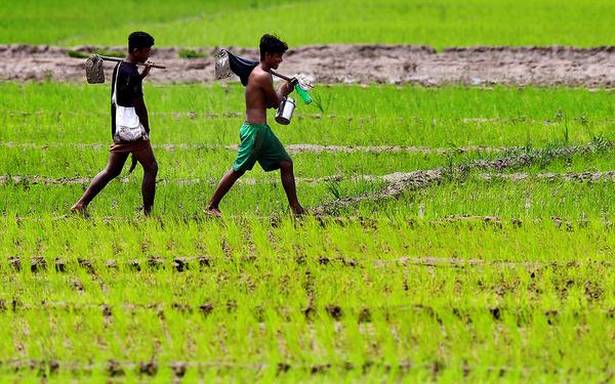 The just-concluded initial public offering (IPO) of Zomato, which has successfully raised about ₹9,000 crore at an astronomical valuation of ₹66,000 crore, makes one believe that money does grow on trees.

More than 150 years ago, Leo Tolstoy, one of the greatest novelists and thinkers of the world, writing in his book, What Then Must We Do, wondered and asked: if everything of value and substance is produced in the rural areas, why then are the villages mired in poverty and cities awash in wealth? That question continues to befuddle us.

All these thoughts brought back memories of my own life from the 1980s. Those days I struggled as a farmer to make ends meet. I toiled all day, living out of a second-hand Army tent in a remote part of rural Karnataka. One day, after harvesting the banana crop and loading it on to my tractor well before dawn, I drove it to the weekly farmers’ market in Hassan, the district headquarters. As I approached the main road leading to the market, my tractor stopped behind a massive row of trucks and vehicles, hundreds of them, all belonging to other farmers. Walking up a kilometre I came across thousands of agitated farmers. They had unloaded their fresh green chillies and tomatoes on to the road and the black tarmac had turned red and green. The heady pungent fumes from the crushed chillies made it impossible to breathe. Discovering that the prices had crashed, the farmers were up in arms as they were not even able to recover the transportation costs. So, they had blocked the roads. Around noon, finally extricating myself from the melee, unable to sell my produce and crestfallen, I ferried the bananas back to my farm and fed them to my cattle.

The IPO event of Zomato also reminded me of those days when banks repeatedly turned down my request for an agriculture loan of ₹1 lakh but two decades later, a bank sanctioned an eye-popping amount of ₹500 crore on a silver platter to my low-cost airline as the airline was publicly listed and a highly valued stock. The value lay in the mind’s eye of the beholder, who, unbeknownst to me, was in thrall to mythic bears and bulls who swayed the bourses.

All these strange phenomena of the modern economy hark back to the old conundrum: how is it that those farmers who own land, toil and till; produce real stuff that we eat and drink and touch and feel; produce things that keep us fed and warm — grains, fruits, vegetables, meat, cotton, wool and silk and so on — live in destitution whereas the merchant who peddles them or the broker who speculates is rich? The multinational behemoths which retail groceries and other products (Kraft Heinz, Cargill, Tyson Foods, Danone, Nestle, Unilever, Walmart, Reliance), those which build solid steel plants, automobiles, buildings, bridges, ships, railways and chains of hotels may in turn wonder why they do all the heavy lifting but are overshadowed in their stock market valuation by Amazon, Microsoft, TCS and Infosys. And now, the new kids on the block — Byju’s, Zomato, and Paytm — are more valuable than those that have been working for decades. The Manipal Group, for instance, runs scores of medical and engineering colleges and hospitals. It owns hundreds of acres of prime land across cities in India and even overseas. It has massive education complexes and impressive laboratories, medical diagnostics equipment, and surgical operation theatres. Despite thousands of crores of investments and hundreds of professors and doctors and nurses, it is valued at a fraction of Byju’s.

Similarly, the Taj Hotels, Oberoi Hotels and other five-star hotels own the most expensive real estate. They have luxurious rooms and suites, gourmet restaurants, spas and salons, and swimming pools fit for maharajahs. But they are valued less than a fraction of Zomato. And Zomato, which produces nothing and only purveys the food made by innumerable restaurants across the country, has almost twice the valuation of Jubilant FoodWorks that owns Domino’s Pizza. While others make profits, Zomato and the new unicorns all bleed cash but have dizzying valuations.

I met Neeraj Gupta of Meru Cabs, who was the first entrepreneur to launch nationwide GPS-linked radio taxis in India. He revolutionised urban mobility a few years ago. He owned more than 3,000 cars then. His company now has a fleet of 9,000 cars. But Uber and Ola, which manage a few lakh taxis across the metros of India, have upended his business model. These are asset-light companies that only manage the taxis enlisted on their Internet platform. They meet the needs of customers with optimal, effective and timely use of available resources but have heady market caps. I am not discrediting these Internet companies. These are indeed brilliant concepts.

Information and data are said to be the new fuel of the modern economy. The Internet makes the world go round and round and the stock valuations of new-age companies can orbit you into space.

But there is limited space in that stratosphere. This world, and life on it, cannot be circumscribed in a make-believe cloud. You can’t eat information and everyone cannot live in the Internet bubble. We need food, clothing, water, housing, transportation, electricity and hospitals, and also flowers, poetry and art. We need education in schools and university campuses where there are teachers in flesh and blood and where breezy, invigorating dialogue, debate, bonhomie, music, and laughter reign. We need restaurants and travel, and beaches with sun, sand, and wine and kisses. We need stout hearty men and women who work with their hands to provide for the world. All that makes for a good life.

That may not make you a billionaire, which the sterile world of the Internet economy can make you, but don’t be disheartened or discouraged. That real world rooted in the earth and soil I speak of can create wealth too. It can give abundant joy and meaning if you do your job with passion and commitment.

Then my thoughts turned to my wife’s 25-year-old Iyengar Bakery tucked away in Malleswaram, Bengaluru. It is a landmark eatery, which is loved and patronised by the local residents. It is part of the cultural landscape. Her wealth has not soared like the stocks of Internet companies. But she is happy and content and loves making breads and buns every day. And she is the master of her own universe.

There are countless such people across India in myriad fields — farmers, teachers, doctors, writers, journalists, masons, carpenters, blacksmiths, mechanics, artists, artisans, grocers and vendors — who serve their communities and provide jobs, livelihoods and security. They make this a wonderful world. Man cannot live by the Internet alone.

Captain G.R. Gopinath is a soldier, farmer and founder of Air Deccan