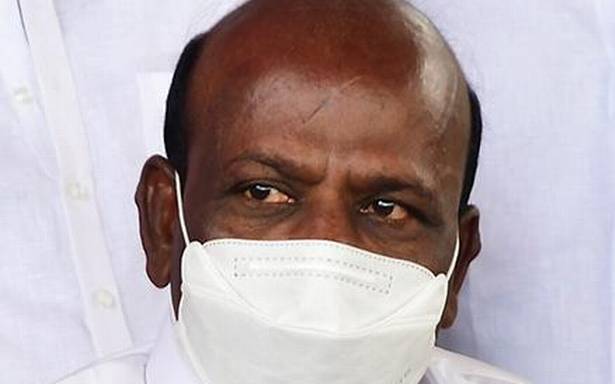 However, security personnel stopped him and rushed him in an ambulance to the Government Kilpauk Medical College Hospital, where he is undergoing treatment for injuries.

Tension prevailed outside the Chief Minister M.K. Stalin’s house in CIT Colony, Alwarpet, on Monday, when a person tried to commit suicide.

However, security personnel stopped him from committing suicide and rushed him in an ambulance to the Government Kilpauk Medical College Hospital, where he is undergoing treatment for injuries.

A senior official of the City Police said the victim who has been identified as A. Vetrimaran of Jameen Devarkulam village of Thoothukudi district had attempted to take the extreme step as his nomination for the village president post for the local bodies election was rejected. Aggrieved at his nomination being rejected, he came to the city and tried to commit suicide in front of the CM’s house on Monday morning, demanding his nomination be accepted.

Health Minister Ma. Subramanian visited the hospital and enquired about the health condition of the victim with the medical staff of the hospital. The video of the Health Minister visiting the victim has gone viral on social media. The Teynampet Police have filed a case and are investigating.