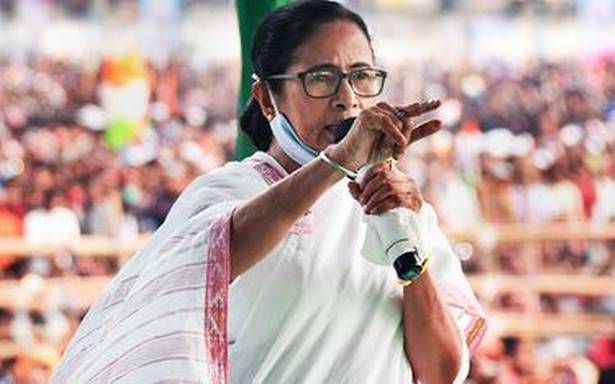 The ₹5 a plate consists of rice, dal, a vegetable and egg curry

With an eye on the upcoming Assembly polls, Bengal Chief Minister Mamata Banerjee on Monday launched “Maa” canteens for providing subsidised meals to the poor and the destitute at a nominal cost of ₹5 a plate.

“This initiative is for the common people. Though we give free rations there is still a huge demand for cooked food. Therefore, we are starting these community kitchens,” she said.

Ms. Banerjee said the government will give a subsidy of ₹15 and people will have to pay ₹5. The kitchens will be run by self-help groups. The canteens will be open from 1 p.m. to 3 p.m. everyday. People will get a plate of rice, dal, a vegetable and egg curry. During the virtual launch, Ms. Banerjee interacted with the District Collectors and the beneficiaries. She asked the authorities to sort out the teething issues and said she will soon have lunch at one of the kitchens.

The Budget tabled by the Chief Minister earlier this month had allotted ₹100 crore for the scheme.

Political observers said the scheme is one of the many initiatives launched by the State government ahead of the elections. The Chief Minister also launched four Information and Technology (IT) parks of Webel (West Bengal Electronics Industry Development Corporation Limited) and a 100-bed Mother and Child hub at the Chittaranjan Seva Sadan Hospital in Kolkata.

State BJP president Dilip Ghosh said the need for providing subsidised kitchens highlights the distress in which the people of the State are in. “The CM had kept people hungry and the poor like beggars,” he said.