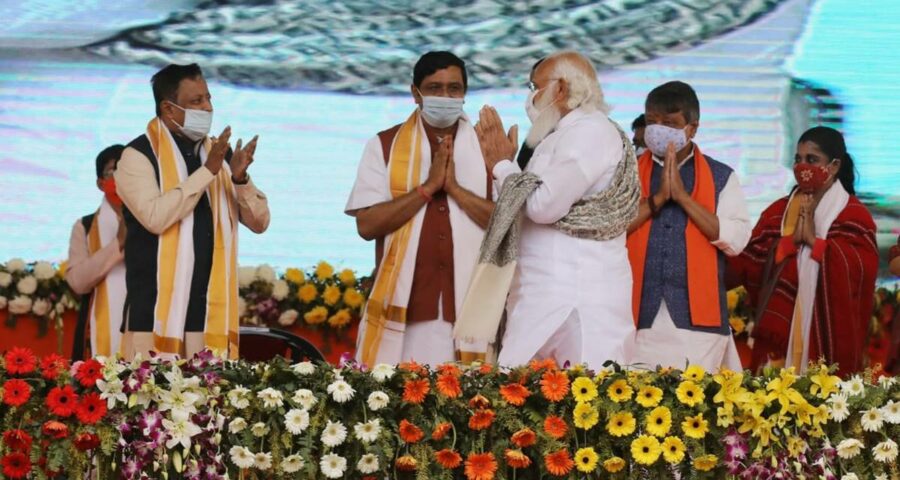 In Haldia, PM Modi said “Bengal had the bhrashtachar (corruption) of Congress, the atyaachar (atrocities) of the Left, and then the TMC misrule. The people of Bengal had hoped for mamata (compassion), but got nirmamta (cruelty) instead.” Addressing his first poll rally in West Bengal ahead of Assembly elections in the state, Prime Minister Narendra Modi said CM Mamata Banerjee was enraged by chants of ‘Jai Shri Ram’, but remained silent when conspiracies were hatched to defame the nation.

“Mamata Didi is irked when you question her government. She is enraged when she hears ‘Jai Shri Ram’ chanted. But she is silent when conspiracies are planned to malign the nation,” PM Modi said in Haldia. “There are some conspirators who’re trying to destroy India’s image. Has Didi spoken anything about them? The country will respond to such conspiracies with all the force at its command,” he added.

The PM said Bengal had been among the leading states of India before Independence in terms of infrastructure, educational facilities as well as job opportunities, but lagged behind later, because its politics was never one of ‘vikas’ (development).

“Bengal first had the bhrashtachar (corruption) of Congress, then the atyaachar (atrocities) of the Left, and finally, the misrule of the TMC. The people of Bengal had hoped for mamata (compassion), but got nirmamta (cruelty) instead… The state can see true poriborton (change) only under a BJP government. The TMC and the Left aren’t much different from each other, in fact, in these elections, they are  playing a fixed match,” Modi said.

The Prime Minister also slammed the Mamata Banerjee government for not implementing several of the Centre’s schemes, such as PM Kisan and Ayushman Bharat, in West Bengal. He said the relief sent to Bengal by the central government during Cyclone Amphan and the Covid-19 pandemic could not reach the intended beneficiaries because of the TMC regime.

Accusing the TMC of criminalising politics, institutionalising corruption and politicising civil administration and the police, Modi exuded confidence of forming the next government in West Bengal.

“The people of Bengal have made up their mind to elect a BJP government in the next Assembly polls. In the first cabinet meeting of the BJP government, a decision will be taken to implement all central schemes in the state,” he said.

“Bengal is a state of football lovers. And hence I will say this in football terminology –– the TMC government has committed far too many fouls. The foul of misgovernance, the foul of corruption, the foul of neglecting the poor,” said the Prime Minister.