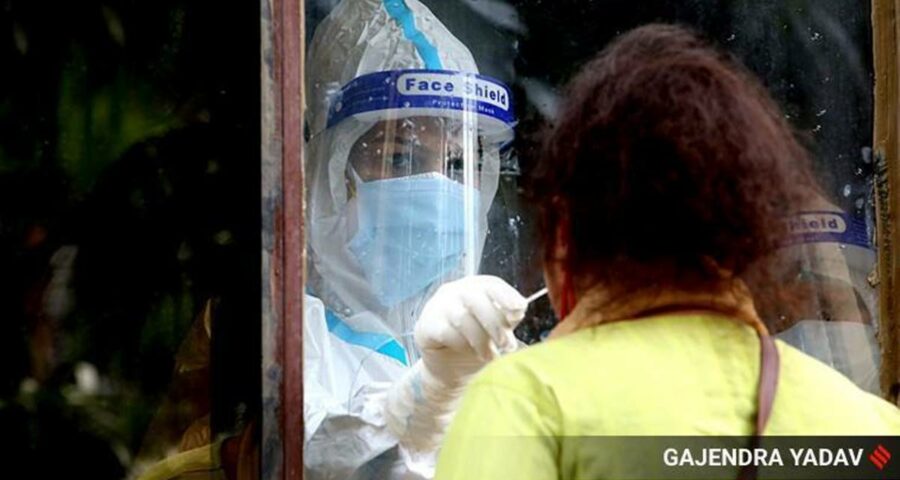 The Delta-plus, formed by mutation in the Delta (B.1.617.2) variant, is currently a “variant of interest”, and hasn’t been classified as a “variant of concern” yet. AT LEAST seven cases of SARS-CoV-2 Delta-plus variant have been found in samples collected from three regions of Maharashtra — Ratnagiri, Navi Mumbai and Palghar. More samples have been sent for genome sequencing to understand whether the new variant is dominant or scattered.

The Delta-plus, formed by mutation in the Delta (B.1.617.2) variant, is currently a “variant of interest”, and hasn’t been classified as a “variant of concern” yet.

The mutation in the virus’s spike protein facilitates entry into human host cells. While the strain has better “immune-escaping mechanism”, research is on to understand its transmissibility, virulence and whether it is resistant to the monoclonal antibody cocktail treatment.

“We found Delta-plus in Navi Mumbai, Palghar and Ratnagiri. After that, we sent more samples, but final reports are awaited,” said Dr T P Lahane, Director of the Directorate of Medical Education and Research (DMER).

Western Maharashtra, especially Kolhapur, Sindhudurg, Raigad, Ratnagiri, Satara and Sangli, has reported a consistently high number of Covid-19 cases and positivity rate, even while the cases have been falling in rest of the state.

At least five of the seven Delta-plus variants were reported from Ratnagiri, where the weekly positivity rate till June 10 was 13.7 per cent as compared to the state’s average of 5.8 per cent. With an active case load of 6,553, it is among the top ten districts in Maharashtra.

“The villages where we found the Delta-plus variant also have people who travel abroad frequently. The infected case in question though has no travel history,” said Dr Gawde.

Officials said one Delta-plus variant each was reported from Palghar and Navi Mumbai. According to officials, unlike the spread of the Delta variant in Vidarbha region, where entire families and villages tested positive, such a trend has not been noticed in the Delta-plus variant yet.

“A few days ago, we sent some samples for genome sequencing to check for Delta-plus. This information is important to immediately plan local containment measures,” said Bangar.

“We are carrying out routine containment measures,” said Dr Suryavanshi.

In April, the Maharashtra government signed an MoU with the Council of Scientific and Industrial Research’s (CSIR) Institute of Genomics and Integrative Biology (IGIB) to sequence 100 Covid-19 positive samples every month from each district.

Saurabh Vijay, State Medical Education Secretary, said they were conducting further sequencing. “After the second wave, we realised it is important to constantly monitor the mutations and how it is impacting Covid-19 spread. That is why we signed an MoU. But the reports need to be analysed before policy changes can be made on the ground,” he said.

Dr Pradeep Vyas, State Health Secretary, said Ratnagiri is already at Level-4, with tight restrictions on movement. “We are following all measures for containment and contact tracing,” he said.

“We are closely monitoring the variant through genomic surveillance. Currently, it is limited. This variant has a potential to escape immune response as well,” said Dr Rajesh Pandey, principal scientist at CSIR-IGIB.

“Therefore, how we behave in the next few weeks is important. People need to follow Covid-appropriate behaviour even after vaccination… unlocking can be gradual and closely monitored. These factors can help contain or at least delay the surge,” he said.

‘I am not the best at being healthy but trying to get better at it’: Tanya Maniktala
Celebrity News