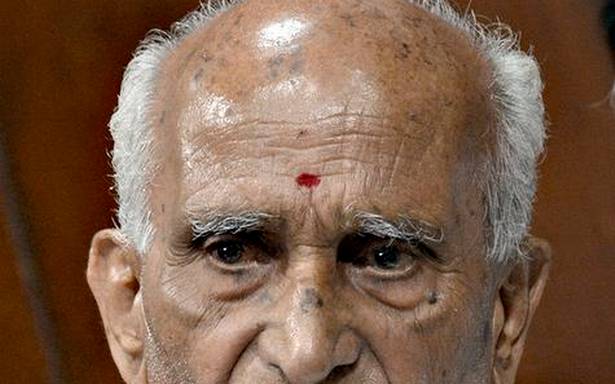 A prominent leader of Mandya, he was also elected MLA for Kirugavalu six times

G. Made Gowda, 94, who was twice elected as MP from Mandya and was in the forefront of the Cauvery agitation, died at a private hospital at K.M. Doddi on Saturday after a prolonged illness.

As one of the prominent leaders of Mandya, he was also elected MLA for Kirugavalu six times. His activities in the public sphere spanned more than six decades as he had also participated in the freedom struggle during his student days and underwent imprisonment.

Born in 1928 at Gurudevarahalli in Mandya district, Mr. Made Gowda studied at Maharaja’s College in Mysuru and Government Law College in Bengaluru.

Mr. Made Gowda was recognised as one of the prominent leaders to have spearheaded the Cauvery agitation along with Karnataka Rajya Raitha Sangha and other groups to protect the interest of the State farmers in the dispute with Tamil Nadu.

He also headed the Cauvery Raitha Hitarakshana Samiti which emerged as an umbrella organisation in Mandya for all other groups with common interest on the Cauvery issue, recalled Badagalpura Nagendra, president of the Karnataka Rajya Raitha Sangha. Kurubur Shanthakumar of Karnataka Sugarcane Farmers Association said he was among the last of the leaders known for value-based politics. In a bid to promote education in the backward areas of Mandya, he founded the Bharathi Education Trust which has nearly 30 institutions under it.

Family sources said the body of Mr. Made Gowda will be taken to his house in Mandya to enable the public to pay their last respects before being shifted to Bharatinagar for the last rites on Sunday. Prominent political leaders, farmers organisations and others condoled his death.