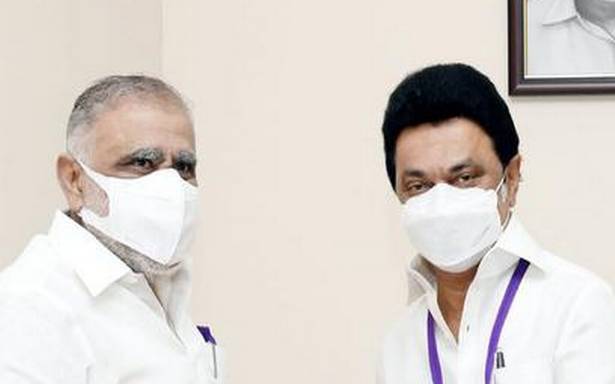 Irregularities in the implementation of the crop loan waiver scheme during the AIADMK government has resulted in a loss of at least ₹516 crore to the State government, Minister for Cooperation I. Periasamy informed the Assembly on Wednesday.

AIADMK MLA and former Minister for Cooperation K. Raju (Madurai West) said the government could act against those responsible for the irregularities. Mr. Periasamy said several cases of irregularities had been reported, especially in Salem and Namakkal districts. “It looks as if the beneficiaries had known that the government was about to announce a waiver scheme.”

Requesting Leader of the Opposition Edappadi K. Palaniswami not to take offence at his remarks, Mr. Periasamy said that though the cooperative banks were computerised during the DMK government, the loans repaid by farmers were not deposited in banks at the end of the day when the AIADMK was in power.

“Receipts of funds have not been fed into computers. Why do you have these computers? To be offered poojas,” he asked during a debate on the demand for grants for the Department of Cooperation.

Listing the kind of irregularities, Mr. Periasamy said six Primary Agricultural Cooperative Credit Societies in Erode district and 12 in Salem district had lent beyond any rational limit. “Loans were granted about five times more than the norm.” He said he had the list of beneficiaries, and was willing to give it to Mr. Palaniswami.

Loans were also granted for barren land, and to farmers for some other crop while their ‘adangal’ indicated that they had grown a different crop, he pointed out. (‘Adangal’ is a revenue record that contains the details of land such as the particulars about the owner, area, assessment, water, irrigation type, soil type, nature of liabilities, tenancy and crops grown.)

Mr. Raju sought to clarify that the Registrar of Cooperative Societies had issued a list of guidelines for the implementation of the scheme.