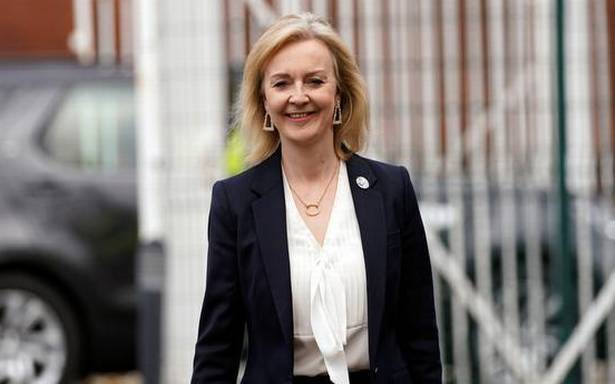 British Foreign Secretary Liz Truss and outgoing Chief of Defence Staff General Nick Carter will visit India this week even as the Indo-U.K. naval exercises involving the Carrier Strike Group (CSG) in the Bay of Bengal gets under way from October 21-27, and ahead of a pending visit by British Prime Minister Boris Johnson, sources said here.

While the strategic purpose of the visits is to discuss the U.K.’s Indo-Pacific strategy and the newly announced Australia-U.K.-U.S. (AUKUS) alliance, both sides are also expected to focus on the situation in Afghanistan, amidst the perception in Delhi that the British government had played a major role in talks with the Taliban that led to them taking control of the country.

The visits, beginning October 22, are also being scheduled ahead of the upcoming Climate Change COP26 summit opening in Glasgow on October 31-November 1. Prime Minister Narendra Modi, who is likely to visit Italy for the G-20 summit on October 30-31, is yet to decide on his plans for COP26, said officials.

Gen. Carter is expected to meet CDS Gen. Bipin Rawat and the three service chiefs. He is also likely to call on NSA Ajit Doval, who as The Hindu had earlier reported, is planning to host a regional conference on Afghanistan in November, and invitations have gone out to several countries including China and Pakistan for it.

New Delhi has been seeking space on events in Afghanistan, given the Taliban control and close links to Pakistan, and discussions with the British military leadership will focus on countering the regional terror threat and terrorism emanating from Afghanistan.

Gen. Carter raised eyebrows in Delhi for comments he made in an interview on August 18, just days after the Taliban takeover of Kabul, where he called the militant group “country boys”. He claimed that the Taliban would recognise the need for an inclusive government, and would allow women to work, particularly in the fields of education, health and government. He later said not just he but “everybody had got it wrong” on Afghanistan.

The comments — and his frequent meetings in Kabul, Islamabad and Doha in the last few months — had been noted by South Block, and Mr. Doval and Foreign Secretary Harsh Shringla are understood to have raised them with the U.K. officials.

In addition to the role in the AUKUS alliance that will enable a fleet of nuclear propelled submarines for the Australian navy, a strategy paper for the Indo-Pacific will also be discussed in Gen. Carter’s meetings with officials, and a roundtable with strategic thinkers. In a sign of the U.K.’s focus shift towards maritime security, Gen. Carter, who will retire at the end of November, is set to be succeeded by Naval chief Admiral Tony Radakin as the Chief of Defence Staff.

Ms. Truss, who has taken over as the Foreign Secretary in September, was in India in February in her previous role as Trade Secretary. India and the U.K. have announced a plan to launch negotiations for Free Trade Agreement (FTA) by November 1 and sign an “early harvest agreement” on high priority goods and services by March, and Ms. Truss is likely to discuss progress towards the deadlines amongst a wide brief of talks on strategic and economic issues, as well as post-COVID recovery.

Ms. Truss had met EAM S. Jaishankar on the sidelines of the UNGA in September, and spoke with him earlier this month after the U.K. decided to revise its COVID travel rules, and accept Covishield vaccinated Indians without quarantines in the face of a strong protest from India.

(With inputs from Dinakar Peri)