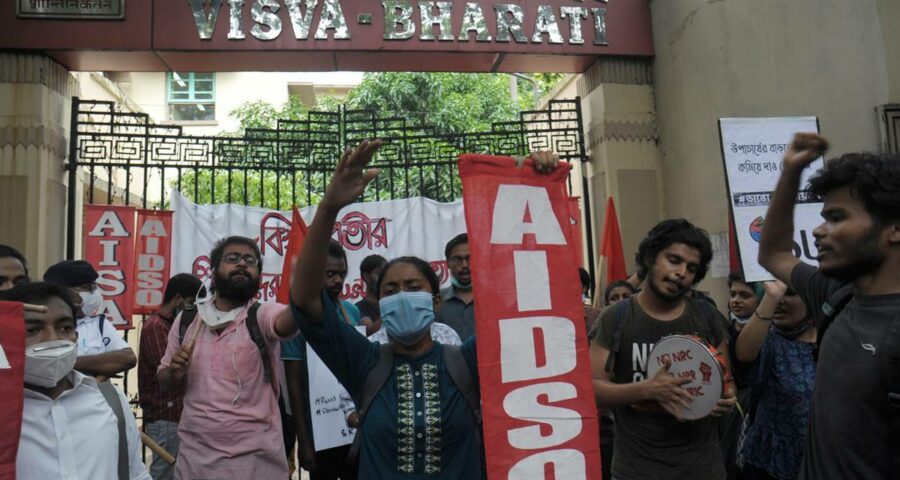 The court also directed Santiniketan police to break all the locks in the institution’s administrative building. 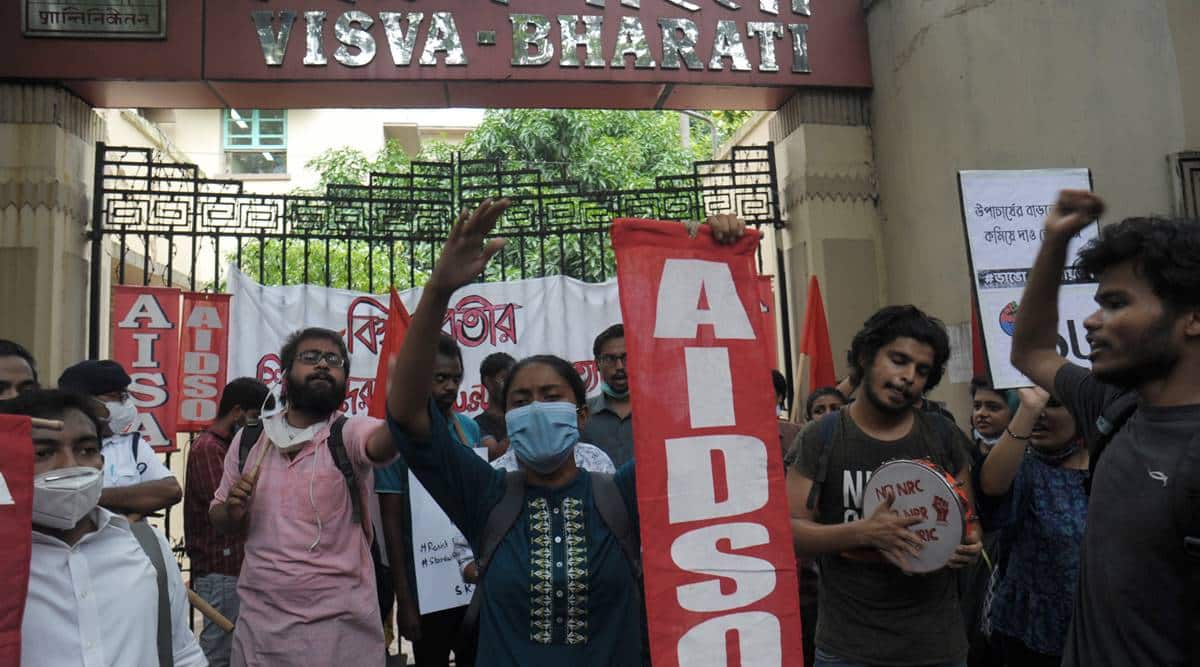 The Calcutta High Court in an interim order on Friday barred demonstrations outside the residence of Visva-Bharati University (VBU) Vice-Chancellor Bidyut Chakraborty, and said protests cannot be held within 50 metres of either the academic and administrative buildings on the university campus or the V-C’s home.

The court also directed the Santiniketan police to break all the locks in the institution’s administrative building. Students have been protesting on the campus, including outside the V-C’s residence, to pressure the university administration to withdraw an order to rusticate three students.

In the order, the single-judge bench headed by Justice Rajasekhar Mantha also instructed the police to appoint three constables for the V-C’s security. “All demonstrations, banners, barricades and obstruction outside the residence of the Vice-Chancellor shall be forthwith removed by the Officer-in-charge, Santiniketan Police Station. The Vice-Chancellor of the University in addition to his own security guards shall also be provided with three constables from the Santiniketan Police Station for his protection. The locks on the administrative building and any other part of the University by the students shall be broken open by the Officer-in-charge, Santiniketan Police Station, and the premises shall be handed over to concerned persons,” read the court order.

The judge added, “No demonstration shall be conducted by any students or any persons within a distance of 50 meters of any portion or part of the University, particularly, the schools, classrooms, the residence of the Vice-Chancellor, teachers, professors, officials, staff library, the administrative buildings, laboratories etc. The demonstrators shall remove any material they have brought into the University premises and dispose of all litter in an orderly manner. Loudspeakers shall not be permitted inside the university premises.”

Following the court directive, the police removed barricades outside Chakraborty’s residence and broke the locks that students had placed on several gates.

Justice Mantha said the normal functioning of the university must be restored immediately. “None of the employees of the university, including the V-C, professors, teachers, officials and other staff, shall be prevented from entering the university premises or the respective schools and departments under it. All obstructions to any CCTV camera in the university at any place shall be forthwith removed and a report to this effect shall be submitted independently bythe Registrar of the University and also the Officer-in-charge, Santiniketan PoliceStation. The normal functioning of the University shall be restored immediately and the Officer-in-Charge, Shantiniketan P.S., shall render all assistance in this regard. There shall be no disruption, howsoever and whatsoever by any person or persons.”

The high court asked the vice-chancellor, and the protesting students not to make any provocative statements, and added that it would “hear the grievances of the three students on the adjourned date or any other convenient day”.

Posting the matter for hearing again on September 8, the judge said, “Police Officers shall ensure that no outsiders are allowed to enter the university, much less conduct any demonstration or use any loudspeaker thereat. Compliance with the directions by the Santiniketan Police Station and/or any other police force, and presence of sufficient police force shall be ensured by the Superintendent of Police, Birbhum. This court notes with anguish that the functioning of a university which grooms the citizens of the future, has been disrupted.”

While the university administration was not available for comments, the protesting students said they would chalk out their course of action after consulting their lawyers. “We have yet to receive a copy of the court order. Once we get it, we will discuss the matter with our lawyers and take a decision on our next round of movement accordingly. However, our protest will continue,” said Somnath Sow, one of the three students who were expelled by the university.

Professor Sudipta Bhattacharya who is one of the teachers suspended by the university, and is taking part in the students’ protest, said the legal battle would continue.

“We are awaiting a response from our lawyers on this and based on their views we will take forward our movement. If the vice-chancellor thinks that he will suppress our movement with the help of the court then he is living in a fool’s paradise. We will continue to fight legally,” he added.

The High Court’s interim order was based on a writ petition that Bidyut Chakraborty filed on Wednesday. The V-C sought the “normalisation of the situation” on the campus and to quell the students’ protest against the expulsion of Sow, Falguni Pan, and Rupa Chakraborty on August 23 for “disrupting the academic atmosphere in the university” earlier this year. The same day, the university also suspended two professors for “gross indiscipline and misconduct”, taking the total number of suspended teachers and non-teaching staff to 20.

On the night of August 27, the students started a sit-in outside the V-C’s residence, demanding Chakraborty’s removal. The members of the Visva-Bharati University Faculty Association (VBUFA) also joined the protest, which entered its seventh day on Friday.

On Thursday, Chief Minister Mamata Banerjee said that while the institution was a symbol of pride for the state, “some problems have cropped up, giving it a bad name”.

State Industries Minister Partha Chatterjee said the university officials should enter into a dialogue with the students and resolve the dispute.

Meanwhile, the VBUFA wrote to Prime Minister Narendra Modi, who also happens to be the Chancellor of the central university, demanding action against Chakraborty, and save the institution from “further degeneration”. The V-C too had written to Modi on Wednesday seeking his intervention.