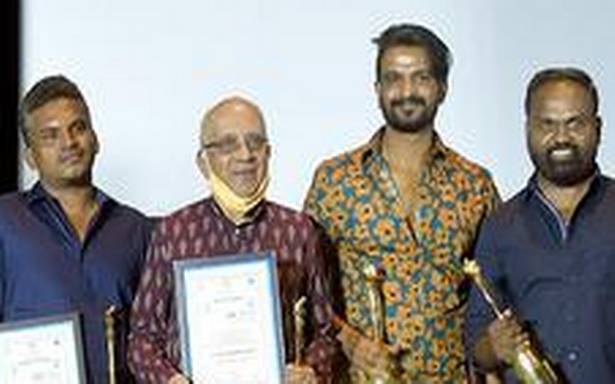 Filmmaker Vasanth’s critically acclaimed film Sivaranjaniyum Innum Sila Pengalum and one of the film’s lead actors, Lakshmipriyaa Chandramouli, bagged the Best Tamil Feature Film award in the Tamil film section and the Special Jury Award respectively at the 19th Chennai International Film Festival, which concluded in the city on Thursday. Vasanth Sai, director and producer of the film, received the award.

Veteran filmmaker Singeetham Srinivasa Rao, who has made several memorable films with actor Kamal Haasan, was given the Lifetime Achievement Award. Popular singer Sid Sriram was given the Amitabh Bachchan Youth Icon Award.

The films were picked by a three-member jury comprising filmmakers Vasanthabalan and S.S. Stanley and a journalist from The Hindu.

A total of 11 films competed in the section.

Mr. Vasanthabalan praised Sivaranjaniyum Innum Sila Pengalum for its sensitive portrayal of the struggles faced by women across different eras and time.

Mr. Rao said he was proud to receive the award in a city that he calls his home and at an international film festival where world cinema is appreciated by the audience.

“I still have concepts and scripts to keep me going for the next 10 years,” said Mr. Rao, who turned 90 in September last year.