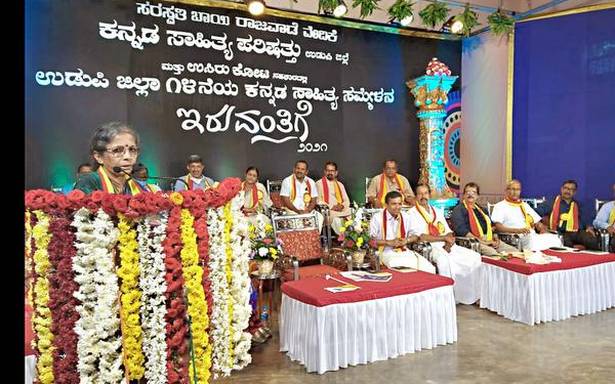 Batting for Kannada, senior litterateur Vaidehi said on Tuesday that depriving children of their right to study in their mother tongue or language of the land amounted to sin. Parents deciding the medium of instruction for their children is nothing but a betrayal.

Ms. Vaidehi said that depriving children of their right to study in a medium of instruction of their choice (mother tongue or language of the land) is like “separating a child from its mother”.

She said that if a child has its early education in its mother tongue or the language of the land, it helps in better understanding of the happenings in its surroundings and also strengthens the ability to perceive as the child grows.

The writer said that the government should make imparting primary education in Kannada compulsory. Children should be allowed to select the medium of instruction of their interest while entering high school.

The writer, who has been awarded with both the Sahitya Akademi awards of the Union and State governments, said that Kannada medium schools in the State should put in extra efforts to attract both parents and students to them. The government should also upgrade them with required infrastructure and human resource. Children should be freed from the menace of going after marks. “Don’t make children to hunt after marks,” she advised.

Ms. Vaidehi said that whichever may be the government in power, it should put an end to rape and other atrocities against women and it should respond to the plights of farmers. It should create an atmosphere to make marginalised sections of society live honorably. If these three issues are addressed, then it would be great achievement for any government, she said.