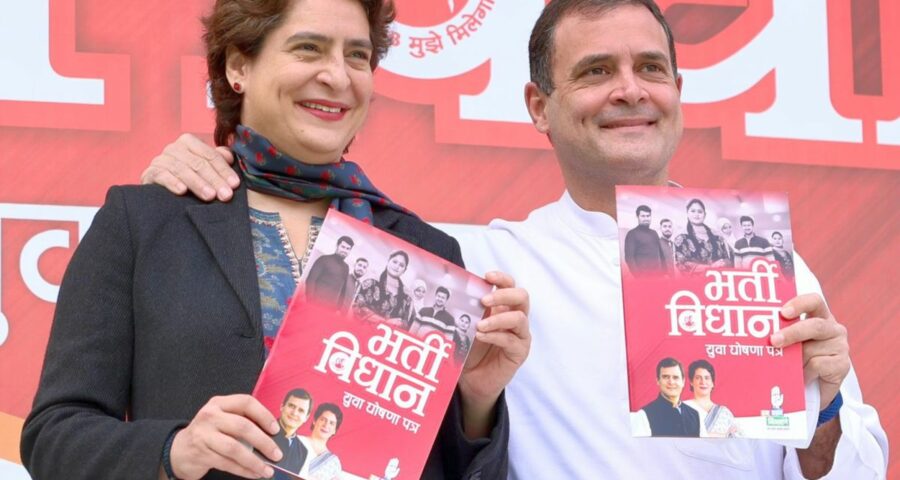 Measure each word you utter in public, advises Virendra Kapoor.

The ruling Bharatiya Janata Party pays utmost attention, if only to shred it both inside and outside Parliament, scoring political points against the de facto boss of the Congress party.

In the process, it also seeks to further burnish Rahul’s public image as an inexperienced and immature leader who cannot be trusted with the arduous task of governing this diverse and difficult land of over 1.3 billion problems.

While constantly claiming that the Congress is increasingly irrelevant to the ordering of the nation’s affairs, the BJP nonetheless seems to look forward to Rahul’s public interventions, picking on each word uttered by the 51-year-old young leader, often twisting his words or seizing upon an ill-chosen phrase or construction to mock him.

From the prime minister down to the last back-bencher on the treasury benches they poke fun at Rahul for his half-baked ideas, amplifying them on social media to strengthen the impression that the Gandhi dynast is beyond redemption.

In the last speech in the Lok Sabha, Rahul played straight into the waiting hands of the ruling party.

Whatever the intention, clarity of words in public speaking is important.

By seemingly questioning the popular belief that India was a nation, and arguing instead that, as the Constitution calls it, it is a mere Union of States, Rahul opened himself for a vicious attack from all and sundry.

Modi tore into Rahul’s notion of a no-nation, citing umpteen historical references from ancient scriptures to the freedom movement to support the claim that India that is Bharat was a nation long before the country became independent.

To suggest that the Constitution alone, and overnight, bound together the states in a single union was to ignore the centuries of shared cultural, spiritual, economic and even political experiences of her people.

Yes, India was a nation before it became a Constitutional entity.

Anyway, our purpose here was limited to point out that the Gandhi sibling seems to be constantly at pain to proclaim that he is not the ‘Pappu’ that he is supposed to be in the wider popular perception.

Clearly, all that mocking and ridicule has got to him, consciously or unconsciously egging him to counter it by proving that, on the contrary, he is indeed a very wise and intellectually sharp mind, keenly engaging with ideas and philosophies.

In other words, all that public mocking has got under his skin, obliging him to try and prove that he is a well-read, deep-thinking person grappling with serious issues.

Hence the frequent references to the Idea of India or the Union of States not being a nation.

The sooner the Congress boss realises that he is far from being the intellectual which he seems at pains to portray in his speeches, and invariably ends up making an utter fool of himself, the better for him.

In the political arena you don’t seek success by talking over the head of the common man.

No, successful politicians cleverly work out the lowest common denominator for the aam aadmi while saving the cerebral for the select audiences.

Addressing the nation in Parliament requires a pointed attack on the widely perceived failings of the incumbent rulers rather than an esoteric discourse on the idea of India and nationhood.

Meanwhile, Rahul’s sister Priyanka Vadra, who is considered better than the brother in measuring her words, did slip up the other day.

And immediately invited a fusillade of sharp invective from BJP trolls.

At a press conference on the campaign trail in UP, when asked about the hijab row in Karnataka, she said, ‘Whether it is a bikini, a ghoonghat, a pair of jeans or a hijab, it is a woman’s right to decide what to wear.‘

Even if the intention was not to suggest that college-going girls can go in a bikini, this is exactly what was deduced from her words, especially when the hijab row was still raging.

Lesson for the Gandhi siblings: Measure each word you utter in public.

Prashant Kishor on way out in West Bengal

Prashant Kishor, the professional poll strategist, may soon find himself ejected from yet another political parlour.

West Bengal Chief Minister and Trinamool Congress chief Mamata Banerjee is increasingly getting fed up with his interfering in the day-to-day running of her party.

The latest provocation came when Kishor’s Indian Political Action Committee reportedly released its own list of candidates for the civic poll in the state.

Further confusion ensued when the IPAC was credited with the proposal to enforce the one-person, one-post rule in the party.

The proposal allegedly had the tacit approval of TMC MP and General Secretary Abhishek Banerjee, who being Mamata’s nephew is widely considered her successor.

On top of all these shenanigans, Kishor finally is set to meet his come-uppance at the hands of the mercurial Mamata when the votes are counted in Goa on March 10.

By all accounts, it will be a miracle should the quirk of the first-past-the-winning-post result in a TMC candidate emerging victorious.

Having staked the TMC prestige and tonnes of money what with saturation wall-to-wall publicity in every conceivable medium from billboards and hoardings to full-page ads in newspapers and on radio and television and, of course, various Internet platforms, if the outcome is zero only a fool will be persuaded to retain the services of the high-cost Kishor and his IPAC.

Interestingly, ever since Kishor first attracted public notice as Modi’s poll strategist in the 2014 Lok Sabha election, his inability to retain his commission for any length of time has become his Achilles’s heel.

He has since worked, albeit for very short periods with the Congress party, the Samajwadi Party, the Janata Dal-United, the DMK and now the TMC.

In fact, Nitish Kumar had even made him a JD-U general secretary but threw him out once he thought he could on his own decide the party’s stance on national issues.

Again, he reportedly set conditions for joining the Congress, conditions which Rahul and Priyanka found unacceptable.

He virtually sought to be designated the de facto boss of the 135-year-old party.

But now it seems his overreach and ambition is about to cause his downfall.

Besides poll strategising is no longer a rocket science, there being other advocacy groups good at assessing public mood and fashioning policies and selection of candidates accordingly.

Kishor and his IPAC has lost its novelty and, therefore, he is now dispensable — even for someone like Mamata Banerjee.