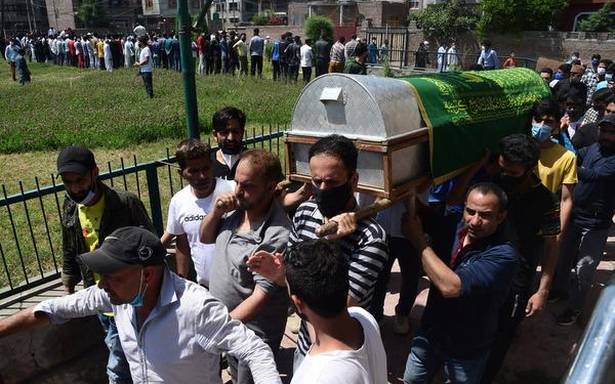 : A four-year-old girl child’s death in an urban pocket, after a leap of leopards mauled and mutilated her body for several hours in central Kashmir’s Budgam, on Friday evoked protests from locals and political parties against the Jammu & Kashmir administration.

The mutilated body of Aadha Yasir Mir, who had been missing since Thursday evening, was recovered after a frantic all-night search on Friday in a nursery in near the Housing Colony, Ompora, Budgam.

As the girl could not be found till late in the night, the search was also joined by personnel of other security agencies, including a team from the State Disaster Response Force.

Locals alleged that the administration was aware of the presence of a leap of leopards in the area but “did not act swiftly”.

“She was my princess. This incident has inflicted a wound that will never ever heal. The administration needs to be made aware and alert so that no other father loses his child in this manner,” the grieving father said during funeral prayers.

The incident has put a spotlight on the growing human-animal conflict in Kashmir.

According to official figures, Kashmir sees a rise in human-animal conflict during winters, when wild animals find it hard to find prey in upper reaches of the Valley. At least 228 persons have been left dead and 3,350 injured in the last 14 years in such incidents.

After interviewing the families of over 200 victims, a study sponsored by the J&K Wildlife Department, titled “Predator Alert” found that 52% of all leopard attacks in Kashmir occurred close to habitations.

“Leopard attacks are higher in concentration in the Kupwara, Handawara areas (north Kashmir) with some dispersed in Khrew-Khonmoh and Shangus areas also,” it warned.

The majority of victims are either less than 7 years old or school-going children (8-18 years), the study found. “[In] 30% of leopard incidents, the victim had been selected out of groups of four or more people,” the report said.

It suggested that such incidents may be pre-empted by collecting, evaluating and processing relevant information rapidly.

According to the study, surveyors found a seasonal pattern in attacks by wild animals, with bear attacks occurring more in autumn, coinciding with the fruit ripening season, while leopard attacks were more common in the winter-spring seasons. “Most attacks occurred in daylight hours,” it warned.