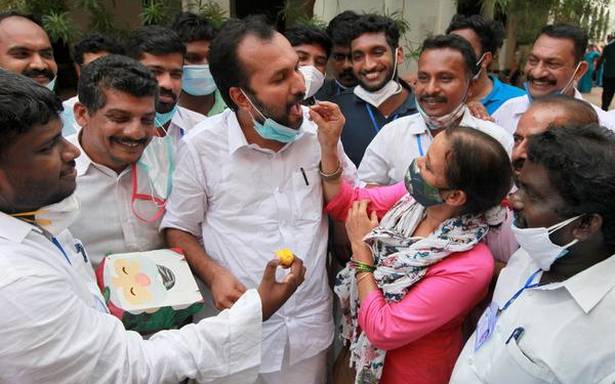 C.R.Mahesh is first Congress candidate to win in Kollam constituency since 2006

Despite the strong pro-Left wave, LDF failed to repeat the clean sweep of 2016 in Kollam by losing two out of the total 11 seats to UDF.

While J.Mercykutty Amma became the only member of the Pinaryi Vijayan Cabinet to lose the electoral battle after P.C.Vishnunath of the Congress defeated her by a margin of 4,454 in Kundara, C.R.Mahesh set a record by becoming the first Congress MLA from the district after 2006.

In 2016 R.Ramachandran had defeated him by a mere margin of 1,759 votes and this time Mr.Mahesh bagged an impressive majority of 29,208 votes, the biggest in the district.

Though CPI had retained Karungappally since 2006, Mr.Mahesh’s victory was much anticipated due to his consistent presence and popularity in the constituency.

The LDF had fielded sitting MLAs in seven constituencies and five of them except J.Mercykutty Amma and R.Ramachandran emerged victorious.

The victory of M.Naushad, who won by 28,121 votes in Eravipuram by defeating former Minister and veteran RSP leader Babu Divakaran, was the first to be officially declared in the district.

M.Mukesh won Kollam constituency by a margin of 2,072 votes in a close fight in which he defeated DCC president Bindu Krihsna.

Though K.B.Ganesh Kumar couldn’t retain his last margin of 24,562, UDF candidate and KPCC general secretary Jyothikumar Chamakkala turned out to be no serious threat for him as he managed a margin of 14,336 votes While CPI’s G.S.Jayalal won the closely-watched Chathannur seat by a margin of 17,206 votes, Kovoor Kunjumon, who has been representing Kunnathur assembly segment for last two decades, retained the seat by defeating UDF candidate Ullas Kovoor with a majority of 2,790 votes.

While CPI(M) State secretariat member and former Rajya Sabha MP, K.N.Balagopal who won the Kottarakara constituency by a margin of 10,814 votes is expected to gain a ministerial berth in next cabinet, Dr.Sujith Vijyayan defeating RSP stalwart Shibu Baby John in Chavara is a major gain for LDF.

CPI’s P.S.Supal and J.Chinju Rani defeated IUML leader Abdurahiman Randathani and M.M.Nazeer of Congress respectively. Mr. Supal, who had replaced Forest Minister K.Raju in Punalur, has a margin of 37,057 votes.