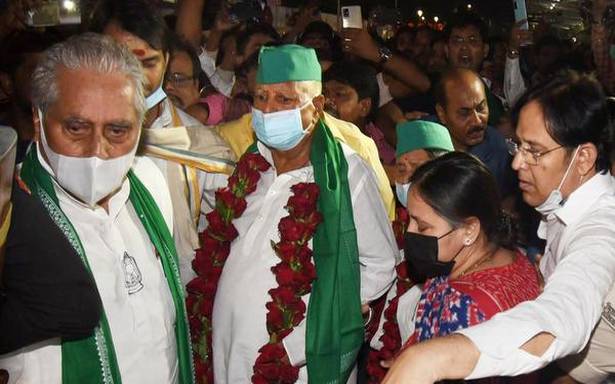 Both sons Tej Pratap, Tejashwi Yadav receive him at airport

Rashtriya Janata Dal president Lalu Prasad on Sunday reached Patna after over three-and-half years. He was accompanied by his wife Rabri Devi, elder daughter Misa Bharti and other family members.

Mr. Prasad, who was accorded warm welcome by party leaders and workers at the Patna airport, is likely to campaign for the party candidates in the byelections scheduled for October 30 at Tarapur in Munger and Kusheshwarsthan in Darbhanga districts. Both Tej Pratap and Tejashwi Yadav, sons of Mr. Prasad, were present at the airport to receive him.

“We are excited that our party leader and bhagwan [God] has come to Patna today and now leaders of all political parties will realise the importance of being Lalu in Bihar,” an RJD worker from Arwal said.

Earlier in Delhi, while speaking to media persons, Mr. Prasad slammed Bihar in-charge of the Congress, Bhakt Charan Das. “Bhakt Charan Das is bhakchonahar [stupid and fool]”, said Mr. Prasad when asked for his reaction over the Congress leader saying that the RJD would join forces (obliquely referring to the BJP) against whom mahagathbandhan (grand alliance) had fought earlier. Mr. Prasad also denied differences between his sons. “Both are my sons and there is no difference between them”, asserted the RJD chief.

Convicted in several fodder scam cases, Mr. Prasad, affected by multiple diseases, was admitted to the All India Institute of Medical Sciences in Delhi. After getting bail he was recuperating at the residence of his elder daughter Misa Bharti since April 30 this year. Since his incarceration in fodder scam cases on December 23, 2017, Mr. Prasad had visited Patna only for few days on parole in May 2018 to attend the marriage of his elder son Mr. Tej Pratap on May 12. He, though, had addressed party leaders and workers in Patna virtually on few occasions from Delhi. Family sources told The Hindu that Mr. Prasad might celebrate the Chhath (Sun god worship) festival in Patna in October after a long gap.

Mr. Prasad is also likely to campaign for the RJD candidates in Tarapur and Kusheshwarsthan for the byelections. “He may address one public meeting at each constituency”, said a senior party leader, adding, “everything depends on his health condition.”

The RJD has been striving hard to win both the seats. The party is locked in a multi-cornered contest as the Congress and the Janata Dal (United) too have fielded candidates there. The younger son and Leader of the Opposition Mr. Tejashwi Yadav has been undertaking hectic campaign in both the constituencies. However, Mr. Tej Pratap has declared support to the Congress candidate in Kusheshwarsthan. Chief Minister Nitish Kumar too is scheduled to address public meetings in both the constituencies for the party candidates.