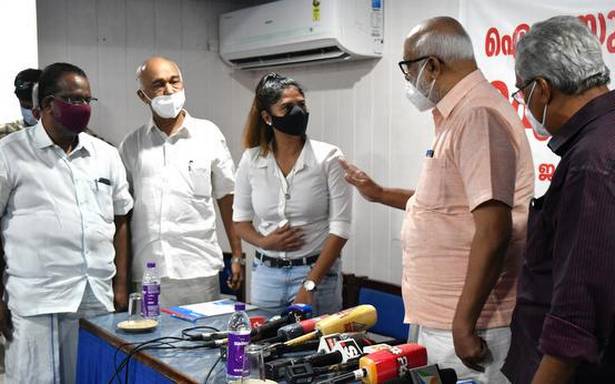 To support islanders in their fight against ‘undemocratic measures’

Leaders of major political parties, cultural activists, littérateurs, and filmmakers on Thursday evening met here to form a Lakshadweep Aikyadardya Samithi (Lakshadweep Solidarity Committee) to safeguard the interests of the Lakshadweep islanders and support them in all ways possible in their fight against the “undemocratic, unconstitutional measures being forced on them by the Lakshadweep administration.”

Benny Behanan, MP, will be the chairman of the committee, and Elamaram Kareem, MP, will be its general convenor.

Aisha Sultana, budding filmmaker against whom the Lakshadweep police have booked a case of sedition, also attended the meeting. Briefing the media on the discussions, Mr. Kareem said the meeting had resolved to support the fight of the islanders against draconian rules like the Prevention of Anti-Social Activities Regulation and the Lakshadweep Development Authority Regulation pushed by the Dweep administration.

As for Ms. Sultana, the case slapped on her for “making a comment on the state [of] affairs on the islands” was a breach of her right to express her opinion. The case should be withdrawn, the meeting demanded.

The committee, Mr. Kareem said, was formed in solidarity with the people of Lakshadweep, and its activities would be expanded in due course. “It is a democratic fight for citizens’ rights at a time the police were trying to fabricate evidence against people the Union government dislikes,” he said, recalling the case against activists jailed in the Bhima Koregaon case and the death, in custody, of Jesuit priest Father Stan Swamy.