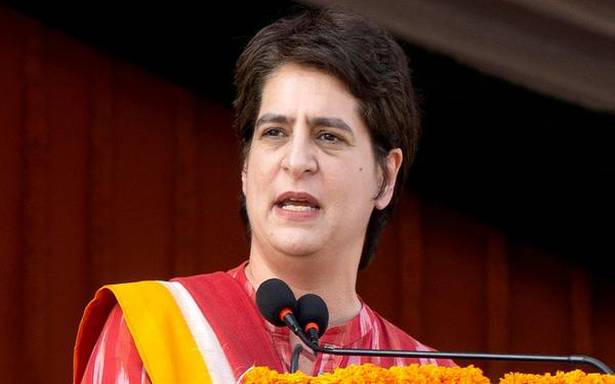 Congress leader Priyanka Gandhi Vadra on Monday said it is clear from the Supreme Court’s observation in the Lakhimpur Kheri case that an independent investigation is necessary for justice, and alleged that the Uttar Pradesh government is standing with those who trampled upon farmers.

Her remarks came soon after the Supreme Court suggested that a former High Court judge monitor the ongoing probe by the Uttar Pradesh Police into the October 3 Lakhimpur Kheri incident in which eight people, including four farmers, were killed in violence during a farmers’ protest.

Listen: In Focus podcast | What happened in Lakhimpur Kheri?

"In the Lakhimpur massacre case, it is clear that the Uttar Pradesh government is standing with those who trampled upon the farmers," Priyanka Gandhi said in a tweet in Hindi.

The father of the person who is the main accused in trampling upon the farmers (Minister of State for Home) has the protection of Narendra Modi, she further added.

“It is clear from the observation of the Hon’ble Supreme Court that there should be an independent inquiry for justice (to be achieved)," the Congress general secretary said.

A bench headed by Chief Justice N.V. Ramana has sought the response of the Uttar Pradesh government in the matter, represented by senior advocates Harish Salve and Garima Prasad, by Friday.

The bench said the investigation was "not going the way we expected".

The bench, also comprising justices Surya Kant and Hima Kohli, suggested the names of former judges of the Punjab and Haryana High Court, justices Rakesh Kumar Jain or Ranjit Singh, for overseeing the probe till filing of the charge sheets in the cases.

It also took note of the delay in procuring the forensic reports regarding the video evidence.

The police have so far arrested 13 accused, including Union Minister of State for Home Ajay Mishra’s son Ashish Mishra, in connection with the case.

Four farmers were mowed down by an SUV in Lakhimpur Kheri when a group agitating against the Centre’s three farm laws was holding a demonstration against the visit of Uttar Pradesh Deputy Chief Minister Keshav Prasad Maurya on October 3.

Two BJP workers and a driver were beaten to death allegedly by the angry protesters, while a local journalist was also killed in the violence.

Farmer leaders have claimed that Ashish Mishra was in one of the cars that allegedly knocked down the protesters but the Minister has denied the allegations.