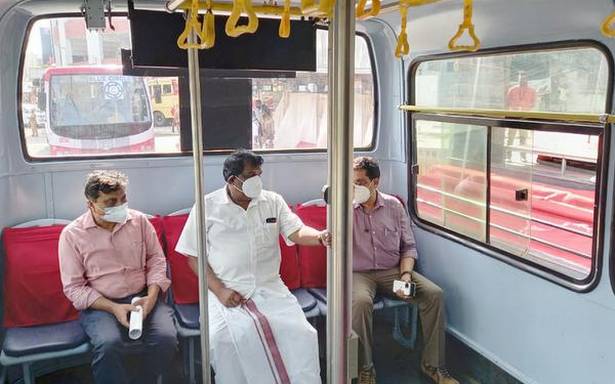 Ninety low-floor non-AC buses were plied during the trial

Kerala State Road Transport Corporation (KSRTC) conducted its first trial run for the proposed circular bus service in the capital city on Sunday. The endeavour that was primarily meant to adjust service timings to overcome possible hurdles such as traffic snarls along designated routes was largely successful.

Ninety low-floor non-air conditioned (AC) buses were plied during a two-hour-long period as part of the timing rehearsal that got under way at 2 p.m. While 54 buses commenced from East Fort, the rest began trips from Peroorkada. Most services reached their destinations within the allotted time. As many as 180 bus crew members and 85 other employees, including 35 inspectors, were involved in the rehearsal conducted on the total lockdown day.

Transport Minister Antony Raju, who oversaw the trial run along with KSRTC chairman and managing director Biju Prabhakar from the Central Bus Terminal in Thampanoor, said the rehearsal will continue for two more lockdown days after making certain changes in the planned routes. The service will be rolled out after a final trial run that will be held during peak traffic on a working day.

The city circular bus service, which will link government offices, hospitals, shopping centres and other major institutions, is primarily meant to provide commuters with more options rather than being forced to reach Thampanoor or East Fort where the services currently originate from.

In the initial phase, the service will be conducted along seven circles, each being designated separate colours – red, blue, brown, yellow, violet, magenta and orange. While buses will be plied both clockwise and anti-clockwise along each circular route, at least five buses will conduct trips in the same direction at a given point of time. They will originate and conclude at the same location. The public-utility hoped to ensure buses reached each bus stop every 10 minutes. With a minimum charge of ₹10, the ticket rates will be fixed as ₹10, ₹15, ₹20, ₹25 and ₹30. Passengers will be able to travel all day long with one-day tickets, named Good Day, that are priced at ₹50. Concession tickets can also got through a prepaid card system, the Minister said.

The service will be expanded to 15 circular routes at a later stage. The company estimated a requirement of 200 low-floor buses for the purpose.