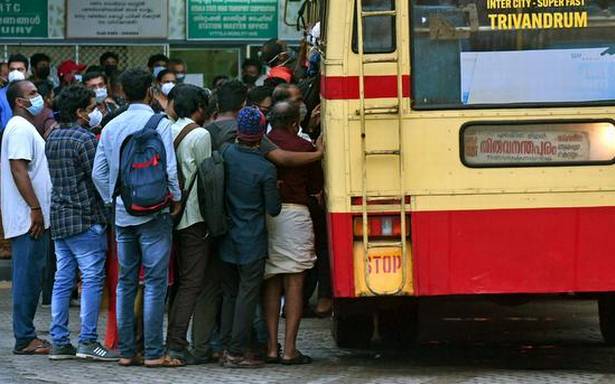 Bus services of the Kerala State Road Transport Corporation have been disrupted across the State following a strike by various employees unions demanding pay revision from the midnight of November 4. On the morning of November 5, scores of people were seen stranded at the various bus depots, especially in Kerala’s southern regions, which are completely dependent on the State-run transport service.

The KSRTC’s buses are expected to completely remain off the roads till the midnight of November 5, as the Kerala State Road Transport Employees Association (KSRTEA) affiliated to the CITU and BMS-affiliated Kerala State Transport Employees Sangh (KSTES) have called a 24-hour strike. As the INTUC-affiliated Transport Democratic Federation (TDF) and the union affiliated to the All India Trade Union Congress (AITUC), has called for a 48 hour strike, the services could be disrupted partially on November 6 too.

The employees unions decided to go ahead with the strike after the breaking down of talks related to pay revision with Transport Minister Antony Raju and top officials of the KSRTC earlier this week. The unions have maintained that their pay has not been revised in the past nine years. Even though the Chief Minister had earlier promised to implement pay revision by June this year, there has been no progress on this front, according to the unions.

With schools in the State reopening earlier this week after remaining close following the COVID-19 outbreak, students, especially from the rural regions which are completely dependent on KSRTC services, will struggle to travel to school. Attendance levels in Government offices are also expected to be affected due to the strike.