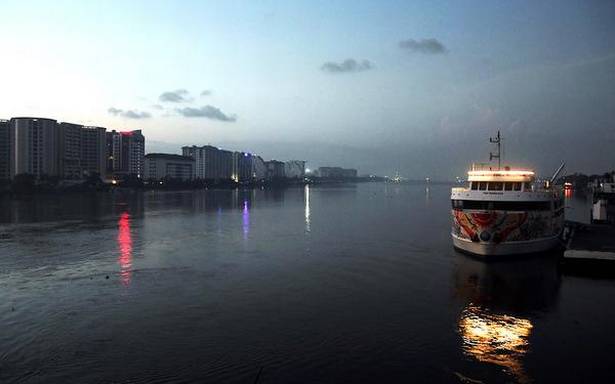 The plight of the State-run Kerala Shipping and Inland Navigation Corporation (KSINC) is a microcosm of the crisis that is staring at Kerala’s tourism sector which brought in revenue worth ₹40,000 crore each year to the State till the pandemic derailed the sector.

The ambitious plans rolled out by KSINC to make it big in the field of tourism, including constructing and operating tourist vessels, have been derailed by the COVID second wave that hit the State in early April. This despite the agency staying afloat amid the lull in revenue caused by the first wave of the pandemic.

The reigning stalemate is most evident in the form of its Egyptian-themed flagship vessel Nefertiti — the first luxury cruise vessel that is based in Kerala and the only one which can take guests 20 nautical miles (38 km) into the sea, remaining berthed in the placid backwaters off Bolghatty Island. It was built at a cost of ₹16.42 crore and was commissioned in 2018. KSINC’s two other high-in-demand vessels — Sagara Rani I and II — which are among the handful of tourist vessels that are permitted to take guests up to the seamouth, idle at KSINC’s jetty on the city side of the placid backwaters, a little away from dozens of private tourist boats which were rendered sans patronage during the past year.

The Kochi-based public sector undertaking which focuses on inland water transport, coastal shipping, and tourism had recorded a profit of nearly ₹1 crore in 2019-20 and crossed business of ₹20 crore by the third quarter of the financial year 2020-21, despite setbacks caused by COVID-19 in Kerala’s socio-economic conditions. Similarly, the revenue from Nefertiti went up from ₹69.84 lakh in 2019-20 to ₹2.4 crore in the last fiscal, despite lockdown restrictions that were in vogue for many months.

“We are working on plans to revive the fortunes of Nefertiti and other vessels once the second wave subsides. Especially so since around ₹1 crore would have to be set apart when Nefertiti is sent for dry-docking in 2022. Over ₹2 crore ought to be spent each year for its upkeep, annual survey by Mercantile Marine Department (MMD) and salary of crew members, irrespective of whether the vessel operates. This is apart from its annual depreciation in value by over ₹1 crore,” said Prasanth Nair, MD of the agency.

Our plans to lease cruise vessels to operate in different routes, including to Lakshadweep and Maldives, too have gone awry due to the prevailing situation. The agency, which gets little funding from the government, is in a catch-22 situation over the pandemic-induced decline in revenue from these tourist vessels and also from its newly-launched boats Michelle and Cleopatra. The daily income from the pair of roll-on roll-off vessels it operates on the Fort Kochi-Vypeen route has in turn fallen from ₹1.50 lakh during pre-COVID days, he added.

“The pandemic has also ushered in a lull in the construction of tourist vessels and barges that we undertook, based on orders from within and outside Kerala. It also caused setback in efforts to arrive at tie-ups with French and Singapore firms. We were also unable to venture into arenas like construction of boat jetties and consultancy in areas like obtaining CRZ certification,” Mr. Nair said.