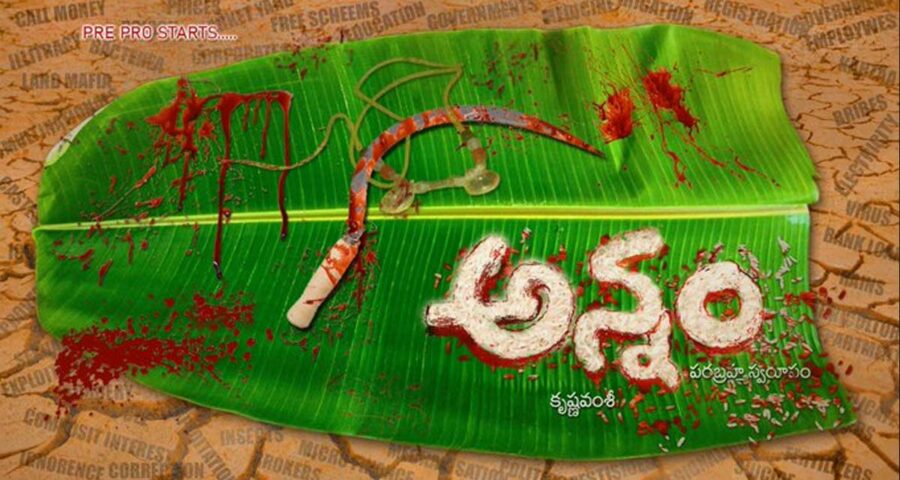 Krishna Vamsi is one of the most popular directors, producer and choreographer. He made his directorial debut with crime film Gulabi  in which JD  Chakravarthi played the lead role. Today on the occasion of Maha Shivaratri, Krishna Vamsi made official announcement regarding his upcoming project  by releasing a new poster.  Krishna Vamsi’ film is titled Annam and ‘Para Brahma Swaroopam’ is the tagline to the title.

Coming on the poster, blood stains are visible on a banana leaf whereas the letters are written with the rice grains.  A land is on the backdrop of banana leaf which has phrases such as Registration, Illiteracy, Microfinance, Bribes,  Call money, Princes,Free Schemes, suicide, land mafia etc.  According to the latest report the pre production work of Anam has been started.

Before making his directorial debut with Gulabi, he worked as an assistant director to Ram Gopal Varma aka RGV. In 2002, he ventured into Hindi film Industry  with  the movie Shakti: The Power, a remake of his own 1998 Telugu cult classic Antahpuram starring  Jagapati Babu, Soundarya, Prakash Raj and Sai Kumar.

Currently Krishna Vamsi is also busy in his upcoming magnum opus Ranga Maarthanda in which Ramya Krishna and Prakash Raj are playing the lead roles.