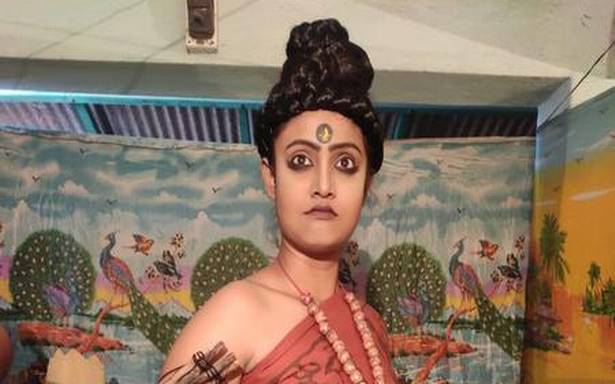 “I like to be known by my first name alone,” insists Sangita, signalling at the outset that she doesn’t think like a regular 24-year-old. “I don’t like to use my surname unless it is absolutely necessary — I don’t believe in the idea of surnames.”

And the young woman from Kolkata leads a double life with ease — Sangita the theatre artiste and Sangita, the Zomato food delivery agent. Both avatars, she says, are united by her love for acting.

“I come from a family that is financially stable, so I did not sign up with Zomato for the money. The idea was to sharpen my acting skills, and also make a point that no job is lowly. In fact, in the time of the pandemic, those delivering food are no less important than doctors and nurses,” says the artiste, who holds a post-graduate degree in theatre and drama from Kolkata’s Rabindra Bharati University and is part of the respected theatre group Bohurupee.

Explaining the connection between acting and food-delivery, Ms. Sangita says, “For an actor it is vital to observe people — the way they talk, their mannerisms, and so on. Due to the prolonged lockdown, this opportunity was missing, and I realised that delivering food could help me stay connected with people.”

It was a month ago that the young woman, who lives with her joint family in Belgharia, on the suburbs of Kolkata, began delivering food for Zomato on her scooter. Her immediate family members, according to her, did not oppose the idea even though some distant relatives did raise eyebrows.

“What I like most about the job is that it brings me decent pocket money and does not confine me to fixed working hours. Then, of course, there are the different walks of life I get to experience — I pick food from posh restaurants, from popular eateries, from cloud kitchens — one place so different from another,” she says.

What she cherishes most, as an artiste, is her interaction with those she delivers food to — occasionally unpleasant but generally gratifying.

“Some customers can be difficult, but otherwise the experience is enriching. The other day when I delivered food to a home, I found the door answered by a girl barely 14 or 15. She looked at me wide-eyed, she had obviously never seen food being delivered by a woman on a scooty. She was clearly awestruck. All she could say was, ‘Thank you, didi bhai!’ Those few moments were so empowering — they lend themselves to a full-fledged script!” says Sangita, dramatically.