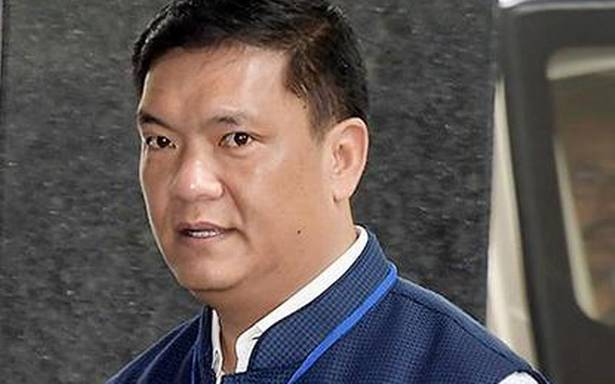 A youth organisation in Arunachal Pradesh has lodged a First Information Report (FIR) against the State’s Chief Minister Pema Khandu over the Kimin row.

Various organisations have taken offence to the Border Roads Organisation (BRO) “renaming” Kimin, a small Arunachal Pradesh town 75 km from State capital Itanagar, as Bilgarh and showing it as a part of Assam. This happened when Defence Minister Rajnath Singh inaugurated the 20 km Kimin-Potin and 11 other road projects handled by the BRO on June 17.

The All Arunachal Pradesh Abo Tani Students’ Union said in the FIR on June 24 that Mr. Khandu connived with the BRO authority “to cede the Kimin-Potin portion of Arunachal Pradesh to Assam”. It also claimed to possess evidence to proceed against the Chief Minister in any competent court.

The Save Arunachal Youth Association, on the other hand, demanded the suspension of Papum Pare Deputy Commissioner Pige Ligu for his alleged involvement in the “renaming” episode. Kimin is in Papum Pare district of Arunachal Pradesh.

The association also gave the Chief Minister a 10-day deadline to suspend the Deputy Commissioner or face a stir.

It claimed that the BRO had intimated Mr. Ligu before the inauguration of the Kimin-Potin road, clearly mentioning that the programme was being held at Bilgarh, Assam. It said the Deputy Commissioner did not make any effort to rectify the BRO’s mistake, deliberate or otherwise.

The association also submitted a letter to Arunachal Pradesh Governor B.D. Mishra seeking an inquiry into the Kimin incident.