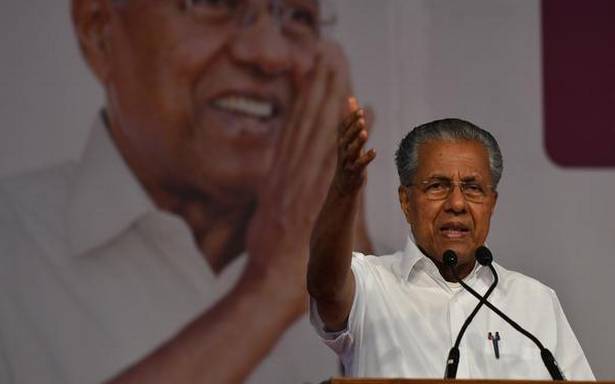 At least two Left Democratic Front (LDF) allies have given the media an inkling of the direction of Cabinet portfolio allocation talks under way behind closed-doors at the AKG Centre in Thiruvananthapuram on Thursday.

K. Krishnankutty, Janata Dal (S) legislator from Chittoor in Palakkad, told reporters waiting outside the CPI(M) State headquarters that the party leadership had assigned him the Electricity Department. He said discussions were on with other allies. Cabinet post-sharing would soon reach finality.

As Minister-designate, Mr. Krishnankutty said he could not make an off-the-cuff remark on whether the government would push ahead with new hydel projects.

Such matters, including the proposed mega hydel project at Athirapally, were policy decisions that required detailed deliberations.

Indian National League (INL) legislator Ahammad Devarkovil said the party had settled for the Ports Department. He said he would also handle Museum and Zoos and Archaeology Department.

However, Minister-designate and Democratic Congress Kerala (DCK) MLA Antony Raju said he has no clue about his portfolio. “The Chief Minister (Pinarayi Vijayan) would decide”, he said.

The CPI(M) was yet to make a formal announcement about its Ministers. Nevertheless, it was heard on the political grapevine that the party would nominate Veena George as Health Minister.

When pressed, Ms. George said she had received no word about her responsibility. There were unconfirmed reports that the party was considering K. Balagopal to the post of Finance Minister.

The conjecture about the allocation of Cabinet portfolios was numerous and diverse.

Some sources said the Forest Department, conceded by the Communist Party of India (CPI), would go to Nationalist Congress Party (NCP) leader A. K. Saseendran.

They said K. Radhakrishnan and Saji Cherian were in the reckoning as Devasom and Fisheries Ministers respectively. Industries Department might go to P. Rajeeve and Local Bodies to M. V. Govindan.

The CPI(M) State Secretariat was expected to issue a release on Cabinet formation soon.