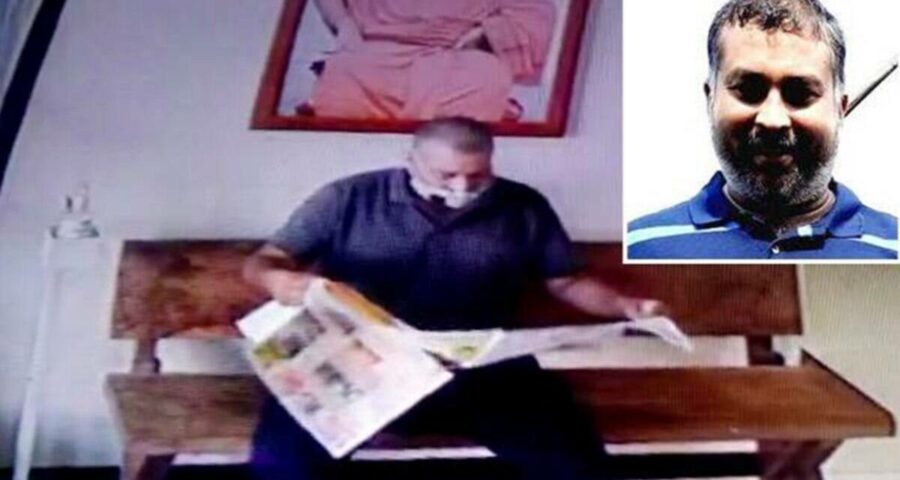 Sanu has been missing since the night of March 21, a day before Vaiga’s body was fished out from a river near Kochi. He was nabbed by Karnataka Police from Karwar on Sunday and brought to Kochi, where his arrest was recorded on Monday. Twenty-eight days after a 13-year-old girl was found dead in a river near Kochi, police on Monday arrested her father, who has been absconding since then, on charges of murder.

Kochi City Police Commissioner C Nagaraju told the media that Sanu Mohan, 40, wanted to end his life due to a financial crisis but did not want to leave his daughter Vaiga, 13, alone after his death. Hence, he first killed the daughter but failed to take his own life before being caught by the police. The probe so far has not revealed the role of another person in the killing, said the commissioner.

Sanu has been missing since the night of March 21, a day before Vaiga’s body was fished out from a river near Kochi. He was nabbed by Karnataka Police from Karwar on Sunday and brought to Kochi, where his arrest was recorded on Monday.

Sanu who lived at a residential apartment at Kangarappady, a suburban area in Kochi, had left his flat in the morning of March 21 along with wife Ramya and daughter. After leaving his wife with her relatives in Alappuzha, Sanu returned to the flat along with the daughter. Later in the night, he was found missing along with the daughter. On March 22, their family filed a missing complaint with the local police. In the afternoon, the body of Vaiga was fished out from Muttar river near Kochi.

The mysterious death and the missing case got a breakthrough last Saturday after a hotel in Kollur alerted Kochi police that a person named Sanu Mohan had checked in at the hotel on April 10 and left the hotel on Friday morning without footing bills. CCTV footage from the hotel showed Sanu sitting in the lobby. The ID card he had furnished at the hotel while checking in also helped the police verify the identity of the absconding person. Early on Sunday morning, he was nabbed by the police in coastal Karwar.

Assistant Commissioner (Kochi) G Sreekumar, who headed the investigation, said after returning to the flat on March 21, Sanu tried to smother Vaiga. After she fell unconscious, Sanu draped her in a blanket, seated her in his car and then drove out of his apartment. He then threw his daughter into the river, leading to her death by drowning.

The assistant commissioner said, “the postmortem has shown presence of alcohol in Vaiga’s body. Besides, there were bloodstains at his flat. We are examining both factors. A detailed confessional statement would reveal more about those aspects,’’ he said.

Sreekumar said Sanu had returned to Kochi five years back from Pune after his steel sales business collapsed causing a liability of around Rs 3 crore. “Cheating cases are pending against him in Pune. After reaching Kochi, he has been running life on loans availed from various sources. His interior decoration business in Kochi did not fetch a profit. But, Sanu still banked upon money availed from various sources. He had pledged gold and his flat for money. As the flow of money got reduced, he decided to end his life.”

According to the police, Sanu did not discuss the suicide plan with his wife Ramya. “Ramya is bold and hence Sanu feared that discussing such a move would spoil his plan. He was very close to their daughter, who was a brilliant student. Vaiga had a happy life with her parents. He thought after his death Vaiga would be left to face troubles and financial difficulties. Hence, he wanted to eliminate her also. Whereas, about Ramya, Sanu’s thought she would be looked after by her parents,’’ said the officer.

Sreekumar said Sanu had told police that he had made several attempts to end his life. “After getting him in custody, we would have to take him to various places where he had stayed after killing the daughter to ascertain his claims about suicide attempts.”

Vaiga had acted in a Malayalam movie and her dubbing work was pending.