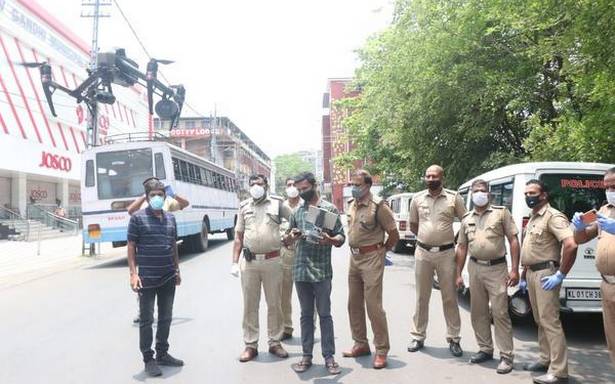 The drones were a force multiplier for police stations with challenging terrain to cover during the outbreak.

D.M. Kiran, 30, was playing weekend cricket with friends at Thrikkannapuram, a leafy suburb in the outskirts of Thiruvananthapuram when a police drone buzzed him.

The incident had occurred during the fag end of the national lockdown in 2020. The drone swooped low, and the players dispersed, he said.

Kiran said the hum of the low-flying police drones were ubiquitous again in his neighbourhood after a hiatus of nearly six months. The pandemic has returned, and with it, the drones.

Additional Director General of Police, Manoj Abraham, told The Hindu that the law enforcement’s swarm of aerial vehicles has taken to the skies over Kerala to persuade citizens to adhere to the COVID-19 pandemic code. They were the department’s "eye in the sky" during the worrying second wave, he said.

Mr. Abraham said the aim was not to identify or prosecute individuals but to remind citizens not to throng public spaces and remain indoors.

The police have kitted out the drones with sirens, flashing lights and speakers (to broadcast orders). The machines have night vision capability and could operate after dark.

Another officer said the police primarily deployed drones over beaches, parks and far-fling neighbourhoods to scan for gatherings. "The drones serve more as reminders than remotely controlled robotic enforcers", he said.

The drones were a force multiplier for police stations with challenging terrain to cover during the outbreak. The police used them to surveil fish landing centres, harbours, inland waterways, lagoons and islets.

Another senior officer said drones were unlikely to be an entrenched feature of policing like patrol vans.

The pandemic had necessitated their return. The police were mindful that incessant drone surveillance could raise questions about privacy and possibly trigger a public backlash. Law enforcement had reserved the use of drones for emergencies, he said.