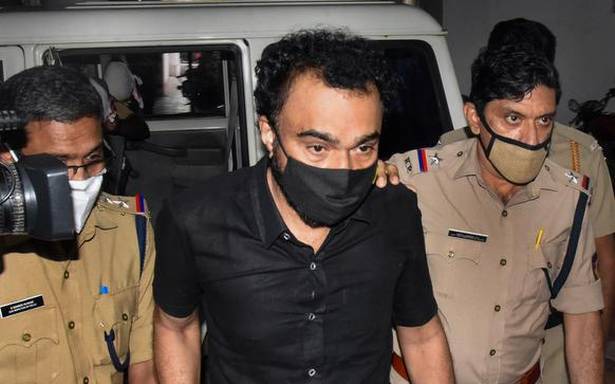 The Crime Branch investigating the cheating case against Monson Mavunkal, the self-styled antique dealer and confidence trickster, on Thursday took the accused to Chitranjali Studio at Kakkanad here for collecting his voice samples for forensic examination.

The move assumes significance, since the petitioners have submitted a lot of audio clips and videos to substantiate cheating charges against the accused.

Later in the day, he was taken to his rented house at Kaloor for further evidence collection, with his three-day custody set to end on Thursday.

S. Sreejith, Additional Director General of Police (ADGP), Crime Branch, told reporters that Monson remained charged with three cheating cases, including on a sculptor’s complaint that he was not paid for his works, which the accused allegedly passed off as antiques. Mr. Sreejith is set to interrogate Monson at the Crime Branch office at Thripunithura later in the day.

Monson, a native of Cherthala in Alappuzha district, was arrested by the Crime Branch last Sunday and is booked for, among other things, cheating six persons of ₹10 crore in less than four years in the guise of an antique dealer and influential businessman.

The mystery around the accused has further deepened after the man charged with cheating crores of rupees claimed to have no money in his bank account.

The man claimed to have busted the entire money on lavish lifestyle, and there was just a few hundred rupees left in his account. It was not entirely surprising, since it had emerged that he had collected and transacted money running into crores through third-party accounts, including that of his former employees who were reportedly in the dark about it till he was nabbed.

The money was reportedly lavished on collecting antiques, a majority of which have now emerged to be fake, sponsoring festivities for building his image, and buying premium cars, some of which he generously gave to a few petitioners, ostensibly to silence them.

The cars have also evoked suspicion, since Motor Vehicles Department officials have reportedly found no details of them, except one in their books. The mansion-like home rented by Monson entailed a monthly rent of ₹50,000, which he reportedly defaulted for eight months, while the monthly power bill exceeded ₹30,000. He also claimed to spend about ₹25 lakh towards personal security, including the salary of his bouncers, in a month.

More videos have emerged where the accused is found boasting his diplomatic privileges even as it has emerged that the man does not even possess a passport and yet acted as the office-bearer of an expatriate organisation without ever going abroad.