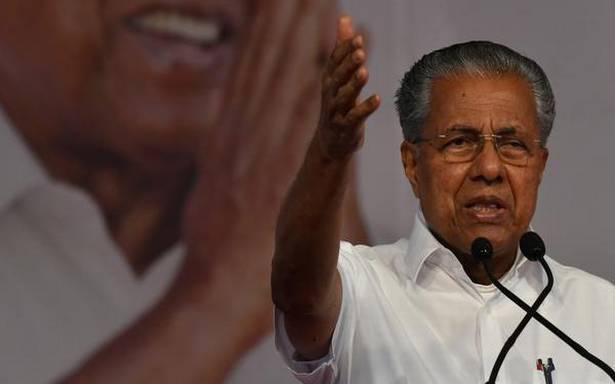 ‘Systemic anomalies and not criminal deceit had resulted in the mix-up,’ he says.

In Kannur, Mr. Vijayan said systemic anomalies and not criminal deceit had resulted in the mix-up. For instance, a bride who shifted residence to her groom’s home had ended up having two voter identity cards for no guilt of hers. “Could anybody categorise her as a fraudulent voter,” he asked.

He pointed out that Mr. Chennithala’s close relatives had inadvertently figured in different electoral lists. It did not mean they were bogus voters.

The Election Commission of India (ECI) had sufficient checks and balances to prevent double voting. Moreover, political agents and election officials closely monitored the poll process at the booth level. The possibility of double voting was remote in Kerala.

The Chief Minister said Mr. Chennithala had sought to defame voters innocent of the jumble by publishing their photographs, names, addresses and family details online. He had done so without their consent. Moreover, the Opposition leader had attempted to destroy their reputation. Several persons had questioned the legality of Mr. Chennithala’s “wanton” action.

Mr. Chennithala should explain whether he had obtained the electoral information legally. His list of “fake voters” was full of inconsistencies. For one, Mr. Chennithala had portrayed a set of identical twins from Palakkad as “bogus voters” in his “blacklist” of “double voters”, the Chief Minister said. (The brothers have moved the Palakkad police against Mr. Chennithala.)

The Opposition leader had chosen a foreign website to publish the “slanderous” imputation against such a large number of voters. He had violated data sanctity norms, Mr. Vijayan said.

In Alappuzha, Mr. Chennithala reiterated the accusation that the government had attempted widespread electoral fraud by using pro-Left Democratic Front officials to manipulate the electoral roll to create an army of “double voters”. He had published the information online in the public interest.

Mr. Vijayan said the Congress and the Bharatiya Janata Party (BJP) had spread canards against the government to steer the poll narrative away from the State’s development and livelihood issues plaguing the people. The “yarn” that the government had created an army of double voters was another “blunt arrow from the Congress’s quiver of lies”.

The Congress and the BJP had resorted to a recriminatory style of campaigning. However, the people had rejected their false narrative in the local body poll in 2020. The trend would reflect in the Assembly election on April 6.