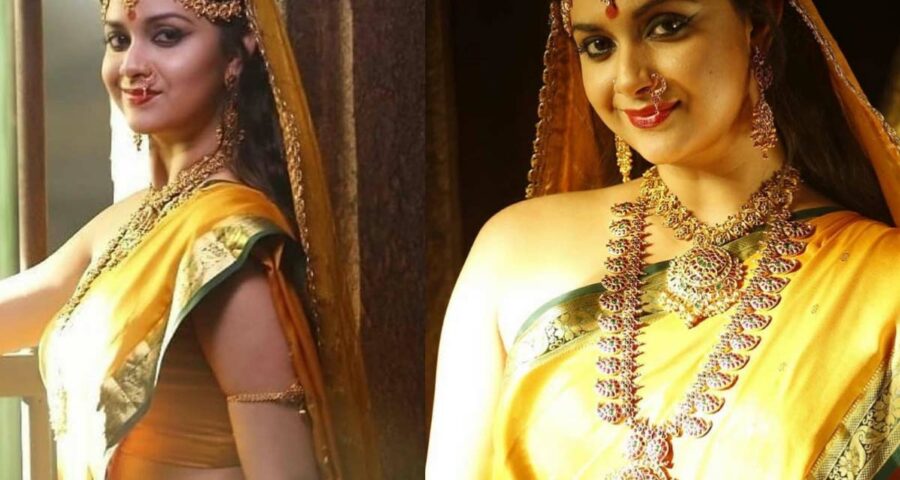 National award winning actress Keerthy Suresh will be seen in the upcoming Mohanlal starrer Marakkar Arabikadalinte Simham. Earlier the makers released the first look poster of Keerthy Suresh from the film  and she impressed her fans with the malayali look.  The Mahanati girl was seen wearing a traditional Kerala saree draped in Malayali style.

Her Malayali look for the film Marakkar Arabikadalinte Simham was appreciated by her fans.  She is playing the role of Aarcha in this historic drama and now Keerthy Suresh’ few pics are going viral on the social media.

Coming on the pic, Keerthy Suresh  is seen wearing a yellow silk saree with a green zari border,  and she looks like a queen. She completed her look with  jewellery and also wore chaniya choli on her head with a golden crown. She also learnt Veena for her character Aarcha who is trained in classical music.

Malayalam star Mohanlal’ character is named Kunjali Marakkar IV who is a naval chief officer in Marakkar Arabikadalinte Simham. The war drama  is helmed by director Priyadarshan, who has helmed the Hindi hit film Bhool Bhulaiyaa. Marakkar Arabikadalinte Simham is a period drama, which is set in the 16th century.  The movie also has Manju Warrier, Arjun Sarja and Suniel Shetty in the crucial roles.