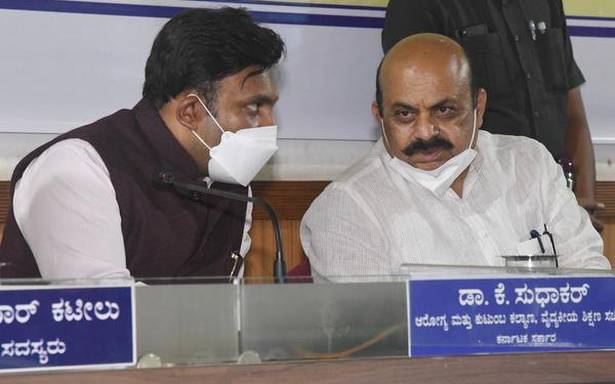 Addressing presspersons on August 30 after chairing a meeting with officials on ramping up vaccination in Karnataka, the Minister said arrangements will be made in the vicinity of slums to fully vaccinate slum-dwellers. “Our target is to fully vaccinate the entire adult population by the end of 2021. We are working on administering 1.5 to 2 crore doses a month from now on,” he said.

“In August, we got 1.10 crore doses from the Centre. Chief Minister Basavaraj Bommai and myself went to Delhi twice seeking increased vaccine allocation for Karnataka, and considering our request, the Centre has increased our allocation,” the Minister said.

Mr. Sudhakar said BBMP has administered over one crore doses in Bengaluru so far. “Our target is to make Bengaluru the first city in India where the entire population is fully vaccinated. We have directed the BBMP Commissioner and other officials to work towards achieving this target,” he said.

With Bengaluru being the epicentre of COVID-19 in Karnataka during both the first and second waves, vaccinating the entire population in the city is the only way to prevent a third wave, he said.

As part of the weekly ‘Lasika Utsav’, more healthcare personnel will be deployed to carry out vaccination drives in the vicinity of slums. “We want to ensure that all slum-dwellers are covered at the earliest,” he said.

Pointing out that Bidar, Yadgir, Raichur and Kalaburagi districts are lagging behind in vaccination, the Minister said special initiatives are being planned to intensify vaccination there.

Officials have been directed to intensify vaccination in the border districts too. “People residing in villages that fall within 20 km of Kerala border will be covered on priority,” Mr. Sudhakar said.

The State will chalk out modalities to vaccinate children as soon as vaccination is approved for them. “Karnataka is one of the few States that has been doing well in vaccination. We have so far fully vaccinated 20% of the population,” he said.

The vast difference between first and second doses is due to the prescribed 84-day gap between the two doses, he said.

On restrictions for festivals and a demand by some organisations to permit celebration of Ganesha festival, the Minister said the Chief Minister will take a call depending on the COVID-19 situation in Karnataka and experts’ advice.

“The restrictions will be applicable for all, including us,” he said.