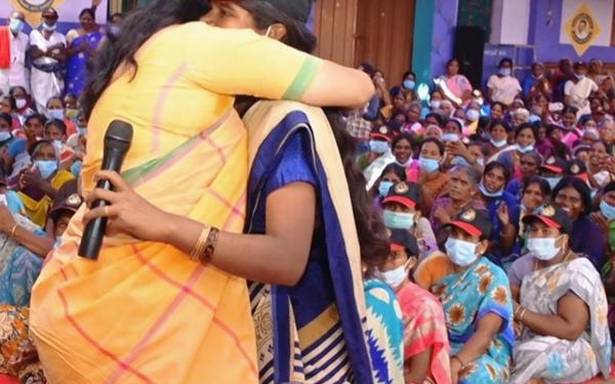 The woman spoke of discrimination faced by her community

The scars of relentless caste discrimination bared themselves for all to see when a young woman had an emotional outburst in front of DMK women’s wing leader M.K. Kanimozhi at the party’s ‘Makkal Gram Sabha’ meeting in Eriyur on Wednesday.

It all began when the woman picked up the mike to voice her grievances. Choked by her emotions, she identified herself by her Arunthathiyar caste and spoke of untold discrimination faced by her community every day. “They won’t even let me take the aarti. Everyone sees us through our caste. They call themselves upper castes, and we are lower castes. Yes, we are lower castes only,” she said in tears.

At that point, a visibly disturbed Kanimozhi walked up to the woman and embraced her. Those present at the event were moved by her gesture.

“All we need is jobs for our children,” said the woman as she wiped the tears rolling down her cheeks.

Another woman from the Arunthathiyar community said, “In our village, there is no one from our community who has a government job. Please do something.”