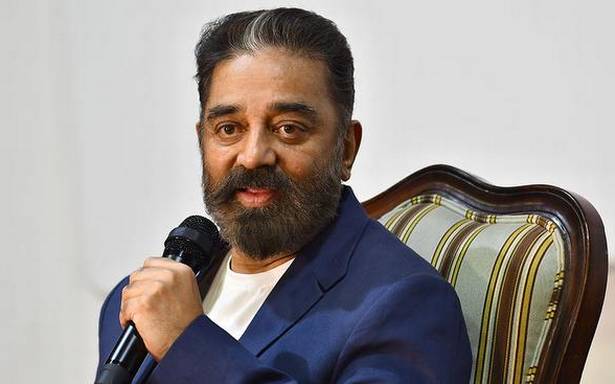 Makkal Needhi Maiam (MNM) founder Kamal Haasan on Sunday attacked the DMK and the AIADMK, alleging that they were both “corrupt” and there was little difference between them. He said he hoped to lead a third front.

Addressing the party’s founding day celebrations at a private engineering college near Chennai, he said DMK president M.K. Stalin kept stating that Chief Minister Edappadi K. Palaniswami was only doing what he had said.

In what appeared to be a veiled criticism of former DMK president M. Karunanidhi, he said he would not continue to be in politics whilst sitting on a wheel-chair. Defending his statement, he said he was talking only about himself and that he respected Karunanidhi.

An audio-visual that sought to portray the party’s journey so far featured not just criticism of the State government regarding its handling of the Thoothukudi Sterlite protest, the NEET issue and so on, but also Mr. Stalin’s comment dismissing Mr. Haasan and his party, MNM. Mr. Stalin had once said that he was “talking about serious politics”, responding to a question.

Mr. Haasan later told journalists that he did not invite Mr. Rajinikanth to be a part of his political journey.

“Two friends spoke. We did not speak politics. He had said that he was not going to enter politics due to his health. How can I call him to work with me as a good friend?” asked Mr. Haasan.

He hoped that the MNM would head the third front.

After stating that the party would strive to create a “Green Channel” government, Mr. Haasan said the party had become “fully digital”. Former IAS officer Santhosh Babu, instrumental in creating the party’s digital infrastructure, said private blockchain infrastructure had been implemented on the party website that has enabled them to fully make their application process for candidates online.

“We have eliminated paper completely in the party — decisions on postings and appointments and changes within the party will be done online through an ERP [enterprise resource planning] software,” said Dr. Babu. The ‘Maiam Connect’ mobile app and Maiam whistle application have also been revamped for communication purposes.

The party had been made paper-free to show that it does not just make empty promises, he said.