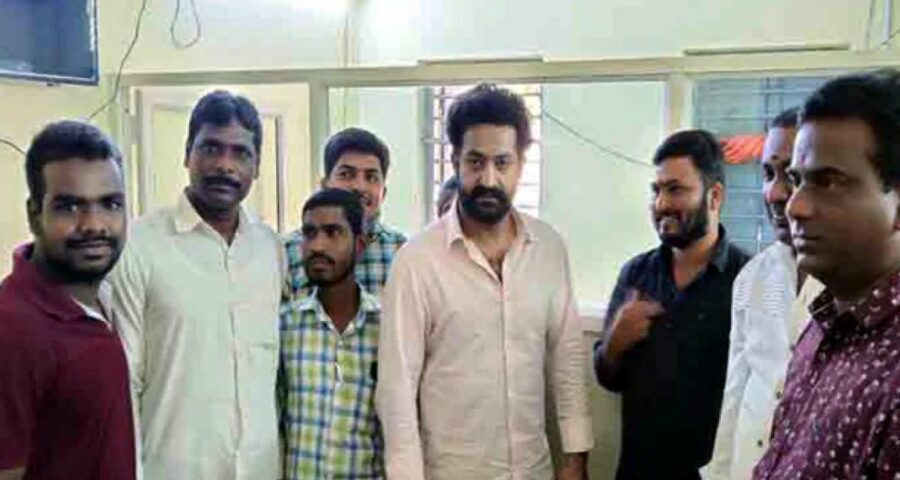 Young Tiger Jr NTR is one of the celebrated actors in the South film industry.  He saw a rocket rise in his career in the film industry after starring in Krishna Vamsi’ action drama, Rakhi in  the year 2006. After that, he went on to do a slew of  films in the  Telugu film industry and impressed fans with his acting prowess.

Aravinda Sametha Veera Raghava fame actor has carved a niche for himself, as he manages to receive thumbs up from his fans and critics alike for his phenomenal acting skills.  He is  known to portray commendable characters on-screen, is touted to be one of the highest-paid stars in the South industry. Now according to the latest report, Jr NTR purchased six and a half acres of farmland in the Gopalapuram village and  the actor also visited the MRO office for the land registration.

Now a pic of Jr NTR, with the MRO office staff and officials are going viral on the social media. As per reports, Jr NTR’s net worth is estimated to be somewhere around Rs 383.35 Cr – Rs 460.02 Cr. His net worth is also apprehensive of his brand endorsements, for which he reportedly charges a massive amount per endorsement.

On the work front,  Jr NTR, who is working for upcoming much awaited period drama RRR, will be flying to Ukraine on 1st August where Rajamouli will shoot a song.

Annadhanam scheme to resume in temples