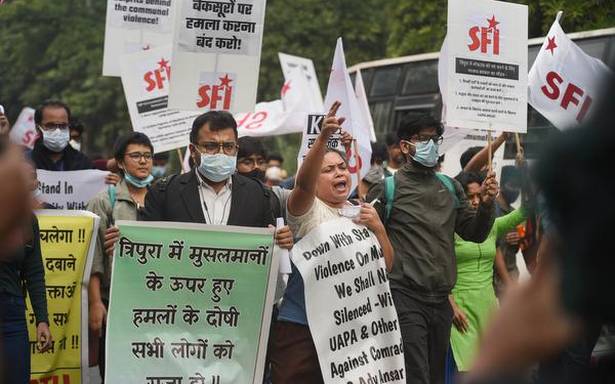 The unions condemned the arrest of Samriddhi Sakunia and Swarna Jha, two journalists with HW News Network, on Sunday.

“We welcome the grant of bail to the two women journalists but demand that all cases foisted on journalists and civil society activists for their reportage or social media posts be withdrawn forthwith. The intimidatory tactics by Tripura police must stop,” the unions said in a joint statement.

They said the arrests were carried out in irregular and legally questionable manner.

“The journalists had tweeted earlier in the day that they were proceeding to Silchar in Assam to take a return flight to Delhi when they were stopped by Assam police, ostensibly on the directions of Tripura police, and lodged in Nilam Bazaar police station in Karimganj district of Assam. After protests from local journalists and lawyers that there were no arrest warrants, they were not furnished with copies of FIRs nor were they any women police officers present, they were initially shifted to a night shelter home and taken by Tripura police by road to Gomati district at 1 a.m. on Nov 15, 2021,” the statement read.

The two journalists were earlier apprehended in connection with their reporting on the alleged burning of a mosque in Fatikroy in Tripura.

“The jittery action of the Tripura Police to censor and silence information from the ground bodes ill for a democracy. These efforts to curb the freedom of journalists to collect and disseminate information must be stiffly resisted. All over the country, we are witnessing brutal attempts to criminalise journalists who are engaged in the pursuit of their legitimate professional duties,” the statement read.