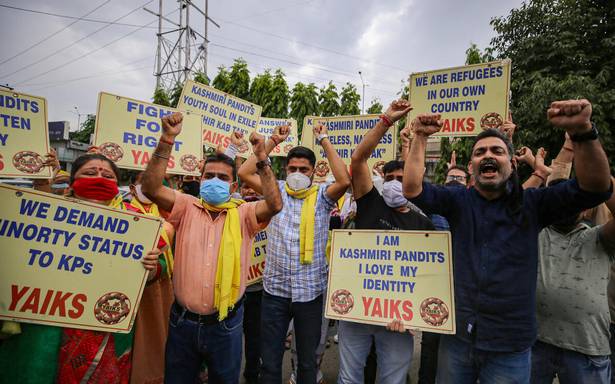 It is expediting work on 6,000 transit accommodations in the Valley and registering Kashmiri Pandits in a bid to spur the migrant community’s return.

The Jammu and Kashmir Lieutenant Governor’s administration is speeding up work on 6,000 transit accommodations in Kashmir and registering Kashmiri Pandits in a bid to spur the migrant community’s return to the Valley from different parts of the country.

Lt. Governor Manoj Sinha, who chaired a meeting of the Disaster Management, Relief, Rehabilitation and Reconstruction (DMRR&R) Department on Saturday, directed the officials “to take proactive steps to facilitate the return of Kashmiri Pandits community”.

“There are many families living in Delhi, Mumbai, Chennai, and other parts of the country and abroad who are willing to return home or register themselves. An extensive exercise must be rolled out to reach out to them through proper means of communication,” he said.

The J&K administration is setting up 6,000 transit flats for migrant Pandit employees in Kashmir, which included 208 in south Kashmir’s Kulgam and 96 in central Kashmir’s Budgam.

Another set of 1,200 transit accommodations are coming up at Ganderbal, Shopian, Bandipora and in north Kashmir’s Baramulla and Kupwara districts. Land for another 2,744 units has been identified at seven locations, officials said.

“First of all, we must ensure that the entire population of Kashmiri migrants is registered with the J&K government,” the Lt. Governor said.

He said many people yearned for their old lives and would like to return to their homeland. Some families were well-settled elsewhere but may want to come here to pay obeisance to their motherland and get registered as Kashmiri migrants.

“It’s the government’s responsibility to make sure this dream of thousands of people turns into reality with the proactive approach of the administration,” he added.

Hundreds of Kashmiri Pandits left the Valley in the 1990s in the face of raging militancy in J&K and settled in different parts of the country.

Meanwhile, the L-G administration has set new deadlines for the transit accommodations. The construction work at Shopian will be completed by March, 2022 and in north Kashmir’s Baramulla and Bandipora by November, 2022.

“We need to double our efforts to ensure that the benefits under various components are being extended to all eligible beneficiaries, especially those who are being left out from the ambit of the welfare measures,” Lt. Governor said.