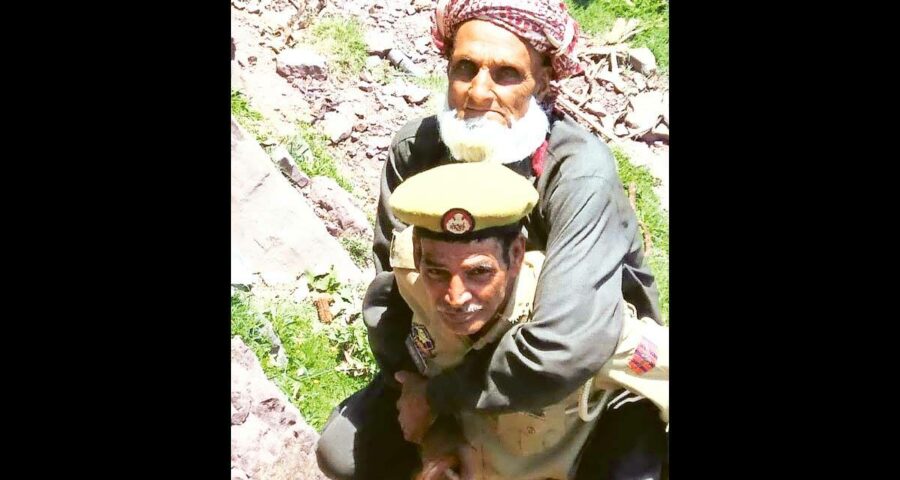 In Singh's arduous climb lay the story of Reasi district’s success in vaccination, and efforts of the 5,700-plus VDC members across remote and hilly areas to allay vaccine fears among people and help them reach inoculation centres. On Thursday, a video showing Mohan Singh, a J&K special police officer (SPO) and village defence committee (VDC) member, carrying a man named Bashir Ahmed, 72, on his back and trekking uphill for over an hour to reach a vaccination camp in Reasi district was widely shared.

In Singh’s arduous climb lay the story of Reasi district’s success in vaccination, and efforts of the 5,700-plus VDC members across remote and hilly areas to allay vaccine fears among people and help them reach inoculation centres.

And at night, these VDC members return to their duty of guarding their villages against militant attacks.

Reasi’s Chief Medical Officer Dr Rajeev Sharma said 74 per cent of the district’s population above 45 years has been vaccinated.

Officials said this percentage would have been higher, but for the remote and hilly parts of the district, especially in Gulabgarh and Mahore, where a sizeable area still has poor road connectivity and a large number of people, being illiterate, are apprehensive of the vaccine. They said while 90 per cent people have been vaccinated in areas forming part of Reasi Assembly constituency, just about 50 per cent inoculation has been achieved in remote areas.

And it is here — in these distant, hilly areas — that police have joined the vaccination drive as a force multiplier.

While VDC members take elderly people on their back and convince the younger ones to go up to the vaccination centres, police provide lunch to poor families coming for inoculation, Singh said. He said nearly 70 per cent staff at police stations in remote areas is engaged in Covid vaccination duty during the day.

Besides the advantage of being local residents and thereby close to local problems, VDC members also have a big influence among villagers since they were at the vanguard against terror attacks even during peak militancy. Even now, the SP said, they guard their villages against any suspicious movement at night, and thus enjoy people’s confidence, which help them in their pro-vaccination messaging.