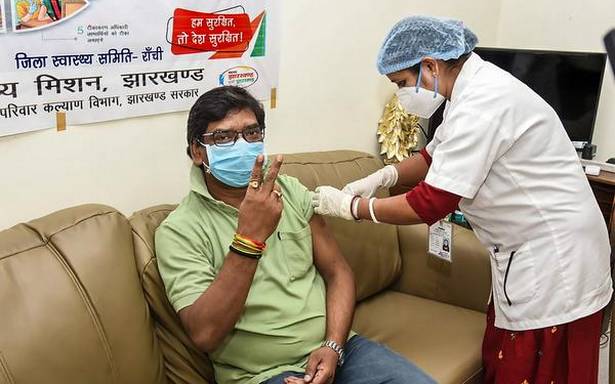 The State had placed a demand for 50 lakh vaccine doses in advance to launch the vaccination campaign for 1.57 crore population in the 18-44 age-bracket

Facing delay in vaccine supplies, Jharkhand which could not launch the inoculation drive for the people in the age-group of 18-44 years on Saturday, has sought Centre’s intervention for facilitating procurement of at least 50 lakh vaccine doses, Chief Minister Hemant Soren said.

The State had placed a demand for 50 lakh vaccine doses in advance to launch the vaccination campaign for 1.57 crore population in the 18-44 age-bracket under the Liberalised and Accelerated Phase 3 Strategy of COVID-19 vaccination for which registration had commenced since April 28.

"There are issues concerning supplies and we have written to the central government for facilitating procurement of at least 50 lakh doses," Mr Soren told PTI.

The CM said that the State was fully geared up to start the vaccination campaign as soon as it received the lot.

"We hope to start vaccination for 18-44 once we start receiving the doses from both the manufacturers," he said.

Health Minister Banna Gupta told PTI, "We have placed an order for 50 lakh vaccine doses. They are saying that it will be supplied between May 15 to May 30.

"We are fully equipped to start the vaccination drive for the age group of 18-44. If you give us vaccines today we will start the campaign from tomorrow." Gupta said the State has made arrangements for inoculation of about 4.5 lakh people in a day.

The minister said that 1.57 crore population in the State fell in the age group of 18-44 years, while the population of those above 45 years including frontline health workers was 83 lakh.

Asked about the people vaccinated in the State so far, the minister said the first dose of vaccine has been administered to about 25 lakh people above the age of 45 years including health workers while the second shots have been given to about 4 lakh people.

Chief Minister Soren, who himself recently took the first jab of the vaccine, urged people, especially the elderly, to come forward to take the vaccine.