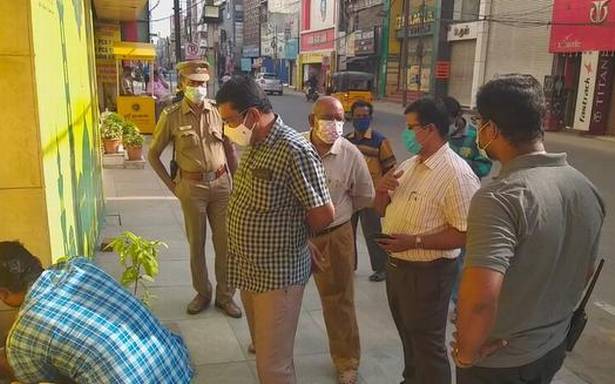 The Coimbatore Corporation on Thursday sealed a jewellery showroom on Oppanakara Street for allegedly doing sales through the backdoor.

Corporation Assistant Commissioner (Central Zone) T. Sivasubramaniyam said that the civic body received an audio message through WhatsApp about sales being allegedly done through a back door of the showroom during the morning hours.

“We inspected the showroom and found that its back door was open. However, no customer was found inside. The showroom has been sealed,” he said. The fine to be imposed on the management was yet to be decided.

In the audio message, a customer calls the jewellery showroom and an employee is heard telling him that sale is on in the morning hours.

The employee is heard asking the customer to come to the showroom between 6 a.m. and 9 a.m. and the security would guide him to the door at the back.

Meanwhile, the police have decided to step up vehicle checks after seeing normal movement of people before noon.

Public address systems have been placed at main signals in the city to create awareness on the need to remain indoors.

G. Stalin, Deputy Commissioner of Police (Law and Order), said the police were imposing fines on violators during vehicle checks and patrols. Enforcement measures would be tightened, he said.