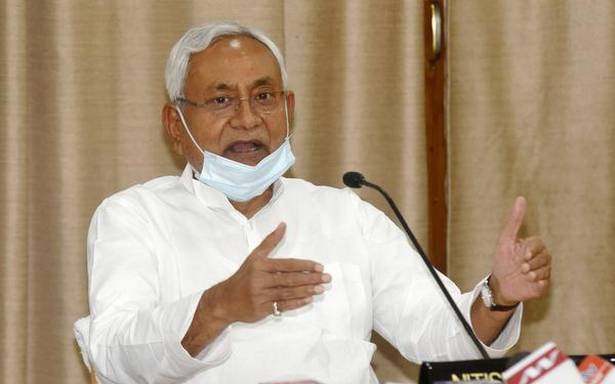 Having held out for proportional numbers in 2019, Nitish has settled for just one minister

There is stunned silence in the JD(U) on the party’s climbdown from its 2019 position of refusing to join Prime Minister Narendra Modi’s Council of Ministers over mere “symbolic representation”, to settling for a single berth in the latest expansion.

JD(U) MP from Rajya Sabha and party chief R.C.P. Singh was sworn in as Minister for Steel on Wednesday.

Party leaders are at pains to explain the reason for the embarrassing capitulation as also the choice of Mr. Singh over other, more experienced, lieutenants of Mr. Kumar.

In 2019, the JD(U) was offered two berths — a Cabinet position and a minister of state. At that time Bihar Chief Minister and then party national president Nitish Kumar taking the high road, had said, “They [the BJP] said they want to give one Cabinet rank to every ally. Then we said that we will discuss it with party members and then only we can say anything over this symbolic representation. I spoke to my party leaders and the unanimous view was that we should stay out of the ministry. Everybody felt there should be proportional representation in an alliance government.”

The party had then argued that the party should get “proportional representation” having won 16 out of the 17 Lok Sabha seats it contested in Bihar against 17 won by the BJP and six by LJP as part of the NDA. Bihar has 40 Lok Sabha seats. As per their deductions the BJP has five ministers from Bihar, so JD (U) proportionally should get four. This time round, too, the party had demanded four positions.

However, two days before the Cabinet expansion on Monday, Mr. Kumar changed his stance saying that he is not aware of any such formula. He said the party’s newly appointed National President R.C.P. Singh was in Delhi and had been authorised to finalise everything with the BJP.

“We are now reduced to the level of Apna Dal or LJP. They too have one member each. What can I possibly say, we are shocked ourselves. This is a daylight robbery and probably an insider’s job,” a senior JD (U) leader said. None of the leaders that The Hindu reached out to, wanted to speak on record.

Other than Mr. Singh, names of Munger MP Lallan Singh, Purnia MP Santosh Kushwaha and Rajya Sabha MP Ramnath Thakur were also doing rounds as the probables. Many also expected Mr. Lallan Singh, who is considered within the party as the architect of dismemberment of Lok Janshakti Party to be rewarded for the job. He has been Mr Kumar’s Man Friday since the 1980s. In 2014 when the JD(U) having contested the Lok Sabha polls outside the NDA umbrella, it could only win two seats. Mr Kushwaha’s Purnia seat was one of these two, making him a strong candidate for one of the four possible ministerial berths.

Since Mr. Singh took oath, Mr. Kumar has not sent out a congratulatory message, though he has been agile enough to tweet a condolence message on the demise of senior Congress leader Virbhadhra Singh. Many see this as a deliberate omission not to stir the hornet’s nest.

Selection of Mr Singh is equally intriguing. He is a Kurmi, just like Mr Kumar. The Kushwaha and Extremely Backward Caste votebank has been completely ignored. Out of the 16 Lok Sabha MPs three are Kushwaha and four from the EBC community.

Mr. Singh, on the other hand an ex-bureaucrat, has worked with Mr. Kumar since his tenure as Railway Minister in the Vajpayee government. He quit service to join the party in 2010 when he was nominated to Rajya Sabha. Over the years, Mr Singh has been the key link between JD (U) and the BJP.