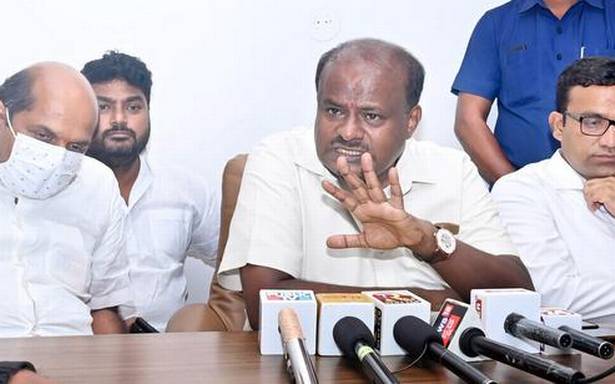 Speaking to reporters in Mysuru on September 1, Mr. Kumaraswamy said he was drawing up a list of candidates for the Assembly elections and had prepared the first list of 102 candidates who will be invited to a two-day workshop at his Bidadi farmhouse on September 28. Another 10 candidates would be added to the list by September 28, he added.

The participants will be coached on how to approach the people, identify their problems and offer solutions. The identified candidates will be visiting each and every village in their constituency, he said.

“I have named this project Mission 123,” he said adding that he was continuously in touch with people and JD(S) workers to galvanise the party through ‘virtual conferences’ in view of the restrictions imposed on account of the COVID-19 pandemic. He claimed the results of his efforts to build the party will be seen in the outcome of local body polls in Kalaburagi.

The people of Karnataka will decide which party is a ‘sinking ship’ and ‘B team’.

“Did we go to BJP’s doors with an offer to align with them? Who came to our leader S.R. Mahesh’s doorstep repeatedly seeking support in the mayoral polls in Mysuru?” Mr. Kumaraswamy said referring to the meetings of Minister for Co-operation S.T. Somashekar, Mysuru MP Pratap Simha and other BJP leaders with Mr. Mahesh.

“On the contrary, it is the BJP, which is a sinking ship. Let them set their own house in order,” Mr. Kumaraswamy said. He asked the BJP leadership to advise Mr. Singh to speak only after understanding the issues and problems of the people of Karnataka.

When asked if Karnataka is in a position to release water to Tamil Nadu as per directions issued by Cauvery Water Management Authority (CWMA), the JD(S) leader told reporters to pose the question to Mr. Singh, who had claimed that the BJP and Centre will protect the interests of Karnataka.

“Karnataka’s MPs and Ministers have no spine or backbone to take up the State’s issues with the Centre,” he added.

Mr. Kumaraswamy said the Centre is aware of the storage levels in various reservoirs in the Cauvery basin and expressed fears about water shortage in Karnataka if rains fail in September. “The CWMA should understand this. In a federal structure, all States should be viewed equally,” he said.

The shortfall in the monthly release of water during the ensuing year has further enhanced the relevance and need for constructing a balancing reservoir at Mekedatu, he said.

Such a balancing reservoir is necessary to prevent our farmers from suffering during years of deficient rainfall, Mr. Kumaraswamy reasoned.