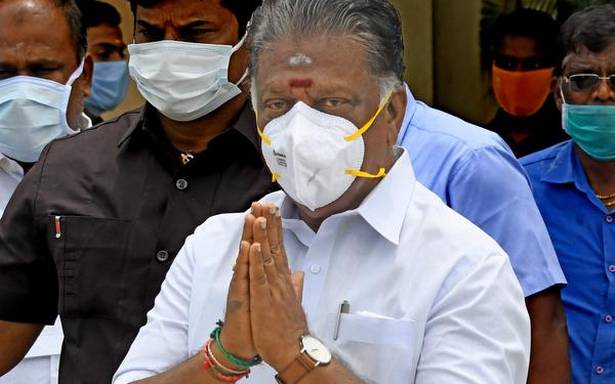 Ten days after DMK legislator and Kongunadu Makkal Desia Katchi’s E.R. Eswaran made a statement in the Assembly over using ‘Jai Hind’, AIADMK coordinator O. Panneerselvam on Sunday expressed regret over the incident and urged Chief Minister M.K. Stalin to take steps to expunge the remarks from the House records.

In a five-page statement, Mr. Panneerselvam urged the CM to focus more on the promises made in the DMK election manifesto over reducing fuel prices, dropping gold and educational loans, besides securing an exemption for Tamil Nadu from the ambit of the National Eligibility-Cum-Entrance Test (NEET) for medical admissions and other people-related issues.

The former CM also took a dig at the DMK government by referring to Mr. Stalin’s statement on July 19, 2019 in the Assembly that when the latter’s party came to power it would not only do what was promised but also those that were not promised. "Probably, the usage of ‘Union government’ and the absence of ‘Jai Hind’ was among those that were not promised," Mr. Panneerselvam took a swipe.

Rejecting Mr. Stalin’s justification in the Assembly over using ‘Union government’ to refer to the Centre, that India was a Union of States, Mr. Panneerselvam, who was CM thrice, contended: "As per the Constitution of India designed by its chief architect B.R. Ambedkar, ‘Union’ referred to India which was a combination of various parts and not the Indian government. So, ‘Union of States’ means it is a Union comprising various States."

Mr. Panneerselvam, who was also the Deputy CM between August 2017 and May 2021, rejected Mr. Stalin’s justification that ‘Union government’ was used by former CM C.N. Annadurai, freedom fighter Ma. Po. Sivagnanam and last Governor-General of India and former CM of erstwhile Madras State C. Rajagopalachari, contending they had used it to refer to federalism and not the Indian government.

"Instead of maintaining cordial ties with the Centre and ensuring that the State’s rights are protected and demands and livelihood issues are met, belittling the Government of India by calling it the Union government, is not beneficial to the people. This is not acceptable," said Mr. Panneerselvam, the coordinator of the AIADMK, the principal opposition in the Assembly.

Referring to Mr. Eswaran’s statement that Tamil Nadu has held its head high by the absence of the words ‘Jai Hind’ in the Governor’s address, Mr. Panneerselvam said: "Is this appropriate? Is this is line with the country’s integration? are the questions from the people of Tamil Nadu."

Mr. Eswaran during his speech in the House had thanked for DMK government for avoiding ‘Jai Hind’ at the end of the Governor’s speech in the House. Jai Hind, a Hindi salutation means ‘Victory to India’ and also ‘Long Live India’. Members of the all legislative parties were present in the House during this incident on June 23.