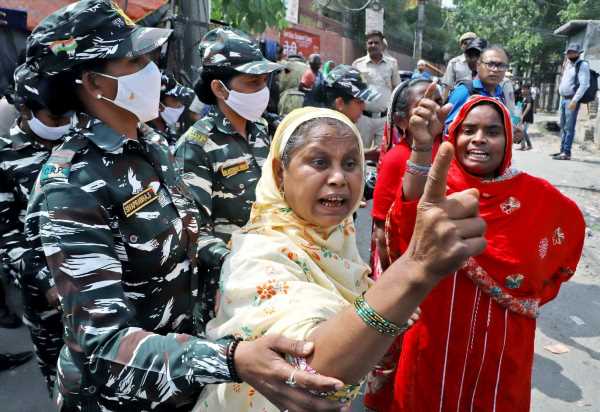 As Jahangirpuri’s C-Block remains heavily barricaded and under tight security following last week’s violence, several residents Friday said they are unable to open their shops or go to work due to restriction on movement which is affecting their livelihoods.

Home to mostly people belonging to lower income groups, C-Block was the epicentre of communal clashes on Saturday.

Its residents generally work either at factories or have small businesses like scrap dealing, mechanic shops, vegetable and fruit stalls and general stores.

Some of them said on Friday that their businesses were also hit by a North Delhi Municipal Corporation anti-encroachment drive on Wednesday as the agency’s bulldozers tore down some makeshift and some concrete structures before the Supreme Court intervened and ordered status quo.

Security has been beefed up in the area now and it remains heavily barricaded.

Large contingents of police and paramilitary forces guarded the area on Friday.

Police said the barricading will stay for some more days.

Locals claimed that police were not allowing them to move freely and open their shops.

Anwara Bibi, a C-Block resident, said the barricading and restriction on peoples’ movement is affecting their livelihoods.

“This barricading is creating a major trouble for us. I and my 17-year old son are scrap-dealers. We are poor people. Authorities are least bothered about our livelihoods. We are not being able to earn our daily bread. How long will this go on?” she asked.

She said her husband does not earn and her family is dependent on her and her son.

“We are a family of four. I have to pay the rent of my house. How will we go on without earnings? My family is dependent on me and my son,” she told PTI.

Akbar, 25, another local, said his mobile repair shop at Kushal Chowk has been shuttered for the past six days and it was becoming difficult for him to survive without any earning.

“I started this shop five months back and now for the last six days I am unable to open it. How will I feed my family of eight people? I pay Rs 15,000 rent for this shop every month. I have also taken a loan for which I have to pay an EMI of Rs 15,000. I have no idea what will happen,” Akbar lamented.

“Barricading will remain for a few more days. Situation today is better than previous days and we are keeping an eye on law and order here,” he said.

Inward and outward movement at C-Block was regulated by the security personnel, but students in uniform and those going for an exam were allowed to move.