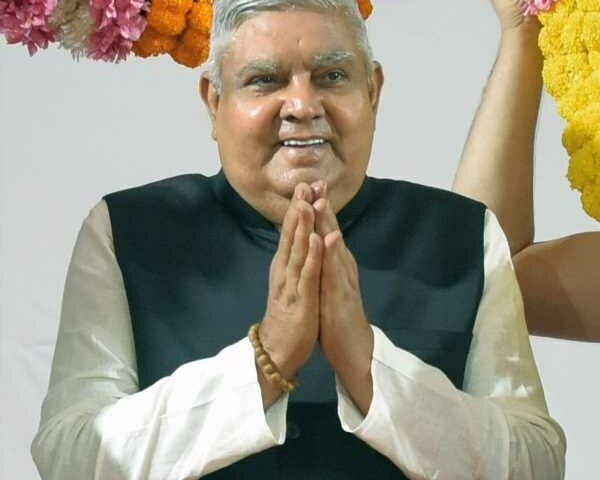 As vice president and ex-officio chairman of the Rajya Sabha, Jagdeep Dhankar is inheriting a troubled legacy.
Although the government faces no real numerical challenges in the Upper House, political and legal challenges are there aplenty.

The late finance minister and Bharatiya Janata Party leader Arun Jaitley must have smiled from the heavens when Jagdeep Dhankhar, 71, was elected vice president of India on August 5.

Dhankhar was his pick, but he could not have known that a man he proposed for governor would rise to such dizzy heights.

The two were colleagues during V P Singh’s tenure as PM — Jaitley as law officer and Dhankhar as Supreme Court lawyer, as well as the Lok Sabha MP representing Jhunjhunu from 1989 to 1991.

In Rajasthan, Dhankhar is better known as a criminal lawyer. He started practice in the Rajasthan high court and became the youngest president of the Rajasthan High Court Bar Association.

When the Jat agitation was on in the state, he was the one who intervened to fight the scores of legal cases against the Jats by the governments in Haryana and Rajasthan.

He was one of Salman Khan’s lawyers in the controversial blackbuck hunting case in Jodhpur.

Dhankhar was elected vice president on August 6, 2022, after he bagged 528 votes against his rival candidate Margaret Alva’s 182.

His victory margin was the highest since 1997.

The election was hardly a challenge. But not so, what comes after.

What is Dhankhar bringing to the table?

A deep commitment to public service: He has been in almost all parties.

He was in the Congress (MLA from Kishangarh, Rajasthan, between 1993 and 1998), and Janata Dal (MP; he had a strong recommendation from Jat leader from Haryana Devi Lal); he was also minister for parliamentary affairs during the short-lived Chandra Shekhar government (1990-1991).

Dhankhar is going to occupy a position held by one of his mentors in the BJP, Bhairon Singh Shekhawat, who was also vice-president.

His brother Randeep Dhankar is an advisor to the Congress government in Rajasthan led by Ashok Gehlot.

In that sense, he does not have a Rashtriya Swayamsevak Sangh/BJP background.

His affiliation with the organisation came with his support (from behind the scenes) for controversial former RSS activist Swami Aseemanand, who was charged in the conspiracy that led to a bomb blast in the Ajmer Sharif dargah in 2007 but was later acquitted.

A few members of the RSS and Vishwa Hindu Parishad were accused in this case and at least two were convicted and awarded life imprisonment in 2017.

Though he stayed in the background, insiders in the RSS-BJP, including Indresh Kumar, who was also acquitted, know about his contribution.

So, there is no doubt about his commitment to the BJP and parliamentary ideals.

But as vice president and ex-officio chairman of the Rajya Sabha, he is inheriting a troubled legacy.

Although the government faces no real numerical challenges in the Upper House, political and legal challenges are there aplenty.

Dhankhar’s run-ins with the Mamata Banerjee-led Trinamool Congress are scarcely a secret since he was appointed West Bengal governor in 2019.

Initially, Dhankhar used every opportunity he got to roil the waters for the TMC government.

And to be fair, the TMC, too, lost no opportunity to irritate the governor.

But when the TMC returned to power after the last assembly elections, Dhankhar appeared to have made his peace with the Mamata Banerjee government.

Not so the TMC, which has lost no opportunity to rile the governor.

Now the same governor is moving to a House where the TMC has a significant presence.

In November last year, the TMC did not let the Rajya Sabha function when many of its MPs were suspended for entering the Well, shouting slogans and holding placards.

Now, again, seven of its MPs were suspended during the recent monsoon session which was curtailed four days ahead of schedule.

As Congress leader Jairam Ramesh points out, there is a 170 per cent increase in the suspension of MPs under the NDA government, as compared to the UPA government.

If the TMC thought the previous chairman and deputy chairman had been unfair, they will likely be even more assertive with this chairman, as he carries over past slights and issues from Kolkata to Delhi.

That’s not the only problem.

Interpretation of rules is also an issue.

Article 267 is a rule designed to let the presiding officer decide if an issue is urgent enough to supersede all other matters — and if so, put aside everything else to enable a discussion.

Rule 267 has been invoked many times in the past to discuss demonetisation (November 2016), the writing down of Article 370 in Jammu and Kashmir, and the agrarian crisis (April 2015).

In the monsoon session too, the debate on price and rise and GST took place after several disruptions as the Opposition was repeatedly asking the government to hold a discussion under Rule 267.

The outgoing chairman had constituted a committee to review procedures and processes in the Rajya Sabha, especially relating to the conduct of members. The new chairman will have to take a view on it.

It is with Dhankhar as chairman that Rajya Sabha will shift to the new Parliament building.

The premises might change, but the people will be the same.