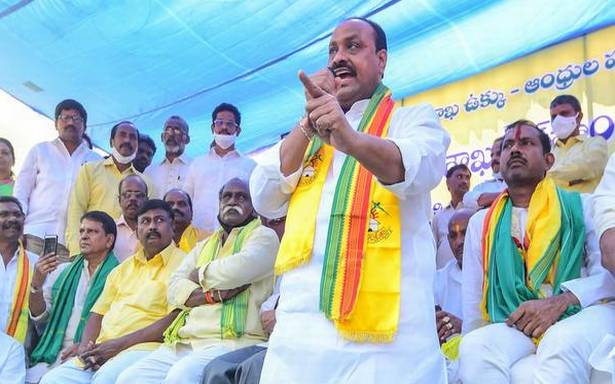 Atchannaidu calls for a united struggle to save the steel plant

TDP State president K. Atchannaidu on Friday alleged that POSCO officials had approached Chief Minister Y.S. Jagan Mohan Reddy after their attempts to set up a steel plant in Odisha was opposed in that State.

At a protest staged at Kurmannapalem here, Mr. Atchannaidu said the people were seeing through the game plan of the YSRCP, but the latter was trying to mislead them.

He, however, said all political parties and people of all the regions should unite to ‘save VSP’.

It was the responsibility of Chief Minister Y.S. Jagan Mohan Reddy to lead the delegation of MPs to New Delhi and exert pressure on the Centre till it revoked its decision to sell its stake in the steel plant. Any attempt to derive political mileage out of the agitation was nothing but betrayal of the people, he observed.

Senior party leader Yanamala Ramakrishnudu demanded that the Centre withdraw its proposal to privatise the VSP. Thousands of acres of land was allotted to the VSP to meet its future needs. It was the responsibility of Mr. Jagan Mohan Reddy to prevail upon the Centre to rethink its decision. He said private investors would be interested in their own profits but not the welfare of the employees.

He alleged that the Chief Minister was feigning ignorance of the Centre’s decision, while former Chief Secretary Nilam Sawhney had attended the meeting in New Delhi when the decision on VSP was taken by the Centre.