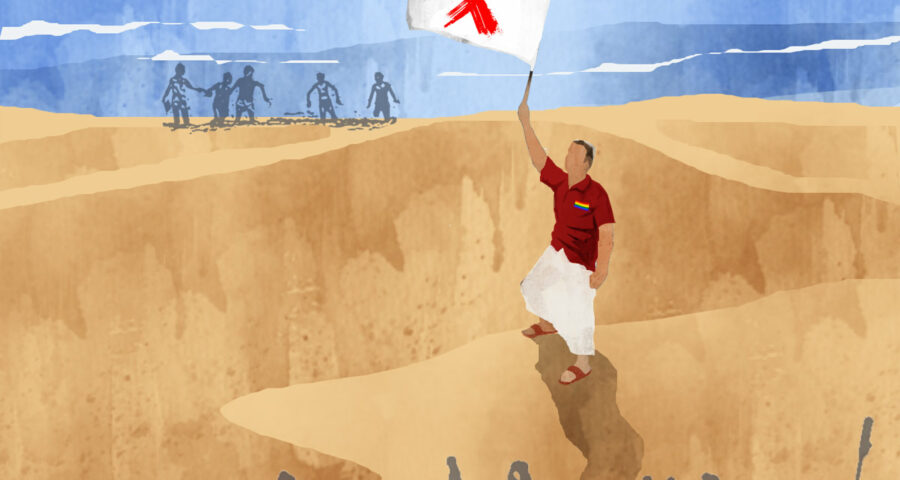 ‘I am not ashamed that I have AIDS. I once announced that I am HIV+ on national TV.’

On World AIDS Day, A Ganesh Nadar/Rediff.com speaks to an Indian who has lived with AIDS for three decades.

My name is B Sekar, I am 61 years old. I have been living with AIDS (Acquired Immunity Deficiency Syndrome) for 30 years now.

I am not ashamed that I have AIDS. I once announced that I am HIV+ on national TV.

I enjoyed sex with multiple partners before my family arranged my marriage. I had read a book about HIV and AIDS, so I decided to get myself tested.

I tested positive which stopped my marriage.

I was depressed and thought I would die. I had a very difficult eight years after that.

My doctors explained to me that though there was no cure I could live with AIDS for years.

I followed their advice and lived a healthy lifestyle. I ate healthy food and every morning I used to run for 5 kms. I still cycle around for errands.

One day I was chatting with a group of homosexuals and a social worker.

The social worker suggested we form a group and approach the government for help. I decided to form an NGO, SWAM.

We decided to work among vulnerable LGBTQ individuals who were in the high risk category.

We explained to them that they should practice safe sex and use condoms.

We also told them that a single partner would make life safe for them.

NACO and TANSAC, both government agencies, helped us with projects and funds.

I had an office in Chennai, I realised there were large numbers of LGBTQ persons in neighbouring Kanchipuram district. I started a branch of SWAM there.

We have 80 people working at my NGO. All of them get a salary from the funds the government gives us. At the moment we have two projects and a funding of Rs 50 lakhs (Rs 5 million) annually.

As I work with two projects I get a salary of Rs 20,000 every month. This is enough for me as I don’t have a family to support.

I spend my time equally between my branches in Chennai and Kanchipuram.

I was diagnosed with HIV in 1992. I was treated with the first line of ART (anti-retroviral drugs).

They lost effect after a few years. Now I am being treated with the second line of drugs. They cost Rs 3,000 a month.

If I fall sick I make sure to take medicines immediately as I know my defence system does not work.

I am proud to be gay and I tell my friends to call me ‘Gay Sekar’.